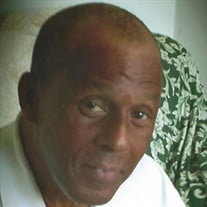 Roger could not bear his cross alone, So weak and worn was he; But, Jesus sent a Friend to help, And now he is at peace. Roger could not find his way alone, Through the dark, lonely night; Then suddenly this Friend appeared, And everything was bright. WILLIE ROGER FLYTHE, affectionately known to his family and friends as “Roger”, peacefully slipped into eternal rest on Monday, February 10, 2020. He was the son of the late Norman Flythe and Henrietta Brown-Flythe, born in Hampton, Virginia, on November 26, 1952. Roger was raised in a loving Christian family and was the fifth child of six siblings. He received his Christian training at the Lincoln Park Baptist Church in Hampton, Virginia, where he accepted Christ as his Savior. Roger loved attending Church School and participated in many of the annual programs hosted there. In 1968, at the age of 15, his family moved to Chester, Pennsylvania, and began their search for a new church home. As a teenager, he never forgot his Christian upbringing and would often journey with his family to Zion Baptist Church. Roger loved helping people and had a heart of gold. He received his elementary education at Union Elementary School in the Hampton Public School District, and his secondary education in the Chester Public Schools in Pennsylvania. After leaving school, he was employed by various companies. He was gifted with his hands and was very talented. His earliest employment was with the Mulhern Bros. Construction Company where he learned to build and model homes. Later, Roger worked as an apprentice at the Sun-Ship and Drydock Company, where he became a first- class welder. He took those welding skills and landed a challenging job with the Perlite Welding Company in Aston, PA. After a while, Roger moved back to Hampton and secured a job with the Newport News Shipbuilding firm in Newport News, Virginia. In later years, he returned to Chester and worked with a construction company owned by his best friend, Robert Williams of the R. Williams General Contractor Company. Roger always wanted to work for himself, so in the late 80’s, he started his own Lawn Care and Landscaping business. Roger married Sheila Miller and to this union they were blessed with a beautiful set of twins; Ta’me Ali-El Flythe and Serenity Ali-El. He loved his twins and didn’t mind feeding them, changing their diapers or combing their hair. Unfortunately, this marriage ended and in later years, he met and married Victoria Wilson. To this union they were blessed with a son, Willie Wilson and a daughter, Sarah Wilson. He was devoted to his children and took them everywhere with him, even during some of his lawn caring jobs. Roger joined the Merchant Seaman and traveled to many ports throughout South America, Mexico and Puerto Rico, delivering and trading goods. He always had some tales to share when he returned home. Roger loved to cook and was good at it. He was always in the kitchen with his mother on the big holidays helping to prepare a meal. He could clean, sew, iron, and wash clothes; and, he was not ashamed of performing those tasks. He was a “momma’s boy” and would do anything for his mother. As a little kid, Roger could always be found sitting on the floor next to his mom, sucking his thumb and rubbing her legs. He was her shadow and she loved it. During his life’s journey, Roger took some roads that were less traveled, but like the “Prodigal Son”, he turned it around and returned to his beginnings. Roger is preceded in death by his parents, Norman and Henrietta Flythe. Roger leaves to cherish his memories, his two sons: Rodney Grasty (Patricia) of Wilmington, DE and Willie Wilson (Selina) of Salem, NJ; three daughters: Ta’me Ali-El of Elkton, MD, Serenity Ali-El of Upper Darby, PA, and Sarah Wilson of Chester, PA; thirteen grandchildren; two brothers: James Flythe of Hampton, VA, and Preston Flythe of Chester, PA; three sisters: Rosetta Alexander (Thomas) of Chester, PA, Mae Alice Hart (Gary) of Willingboro, NJ, and Peggy Ann Scott of Brookhaven, PA; and a host of nieces,

Roger could not bear his cross alone, So weak and worn was he; But, Jesus sent a Friend to help, And now he is at peace. Roger could not find his way alone, Through the dark, lonely night; Then suddenly this Friend appeared, And everything was... View Obituary & Service Information

The family of Willie R. Flythe created this Life Tributes page to make it easy to share your memories.

Roger could not bear his cross alone,
So weak and worn was he;
But,...

Send flowers to the Flythe family.