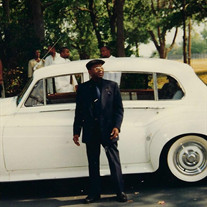 Walter Edward Cox, Jr. was born on March 6, 1943, in Chester, PA to the late Walter Edward Cox, Sr and Mozelle Hughes Cox. He attended schools in the Chester School District and graduated from Chester High. Walt is survived by his lifelong friend Jean Hackett; daughters Crystal, Jeanyne, Cynthia and Marian; sons Arthur and Kenneth; sons-in-law Eric, Mike and Sean; daughters-in-law Shelia and Myra; 14 grandchildren; 6 great grandchildren; brothers Bennie and Lewis; sisters Elizabeth, Nancy, Wanita, Alease and Louise; brother-in-law Charles; sister-in-law Alvirta; a very special niece Tammy; and a host of nieces, nephews, relatives and friends. He is preceded in death son Tyrone; by his brothers, William, Albert, Fred; and sisters Mary, Celestine, Jeanetta. Walter enlisted in the U.S. Army shortly upon graduation, where he served for three years; while being stationed in Korea for one year. Walter was honorably discharged from the Army in 1965. Shortly after returning home to Chester, Walter worked almost one year at the Scott Paper Company. After leaving Scott Paper, Walter worked at the Westinghouse Electric Company where he was a machine repairman for nearly 20 years. Afterward, Walter worked for his family business the Neighborhood Tavern; owned by his brothers Bennie and Fred for the remainder of his working years. Walt loved reading the Inquirer newspaper front to back including the funnies. He also loved sports. He would watch sports with the boys all weekend long driving us girls crazy; because we weren’t interested at all. He also told stories about growing up and playing basketball. He said he played with World B. Free and Wilt Chamberlain several times. They weren’t famous then, but they certainly were good. Back then, if you couldn’t play well you couldn’t even get on the court with them. Walt was a wonderful father, grandfather, brother and uncle. He absolutely loved his family and friends. If you were ever around him, you would not be able to tell who is family and who were friends; because, to Walt everyone was family. Christmas was one of Walt’s favorite holidays because they combined two of his favorite things, shopping and giving. We know men aren’t supposed to like shopping, but Walt did. For those that thought someone else must have picked out those lovely gifts you received from Walt over the years, well, you were wrong. Walt loved to shop, and he didn’t do cheap. He would do sales and bargains, but never cheap. He also did his own wrapping; making those big fancy bows and ribbons with the curls, until he got older and couldn’t do it very well anymore. The holidays also bring to memory another love of Walt’s, which was baking; specifically butter pound cake and his famous “Sweet Potato Pies”. Family and friends came from New Jersey, Maryland and Delaware just to get one of his delicious pies. It has been many years since Walt was able to make his pies, but every year we still say, “Sure wish we had one of Walt’s sweet potato pies”. There is also one more “holiday” we all celebrated with Walt that many people don’t know about; the annual Westinghouse Picnic. Each employee only received four tickets. However, Walt loved his family and friends so much, that he would not rest until he had at least 40 tickets; so that all of his family and friends could attend. This was one of Walt’s favorite “holiday” traditions because the family was all together. “My Dad was so close to his family and loved being with his brothers and sisters so much, that they met daily. My Dad was also kind and very giving. When I look at my aunts; uncles; and especially my cousin Tammy, whom he thought of as a daughter, I know where he got it from. All of you were always there; helping to take care of my Dad and I Love You all so very much. I Love You Dad.” Love Always Crystal Morris

Walter Edward Cox, Jr. was born on March 6, 1943, in Chester, PA to the late Walter Edward Cox, Sr and Mozelle Hughes Cox. He attended schools in the Chester School District and graduated from Chester High. Walt is survived by his lifelong... View Obituary & Service Information

The family of Walter E. Cox Jr. created this Life Tributes page to make it easy to share your memories.

Send flowers to the Cox family.