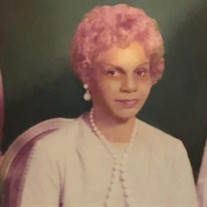 Obituary After a full and joyous life, the Lord saw that she was tired, and welcomed his faithful servant and devoted daughter, Vivian E. Priest, age Ninety-Seven, into his arms. Vivian was born on March 3, 1923 in Wilmington, DE, to Isabelle and Burley Willis. She had three sisters and one brother. After graduating from Howard High School in 1940, Vivian worked for Dravo Ship Building (Wilmington, DE), as one of the first two African-American female tack welders, during the Second World War. Later she would continue as a trailblazer, when she went to work for American Car & Foundry where she was one of only two African-American females to work there, during this time. Vivian would eventually marry Robert B. Priest. Their union produced three children - Michael, Robert S., and Michelle. In the following years, the family moved to Chester, Pennsylvania to raise their children in their very own home - which she did with love. In Chester, the family would join Immaculate Heart of Mary Catholic Church - where Vivian would become a very active member. In her time there, she would perform many duties - from cleaning the altar and answering the phones; to being selected, by the Philadelphia Diocese, as the Summer Program Coordinator for the children of Chester; To serving as co-chair for the 100th Anniversary of Immaculate Heart of Mary Church. In 1966, Vivian would go to work, full time, as a Postal Clerk for the Philadelphia Post Office. A position from which she would retire 23 years later. After her husband's death, in 1974, she returned to St. Joseph's Church in Wilmington DE, where she continued to serve the Lord by assisting the church and the community in several ways. She helped raise funds for the church by coordinating international and local trips, cooking, and collecting donations. In addition, she would serve as a member of several organizations, within the church, in various capacities. She would also obtain clothing and household items for those in need. Until her health started to fail, Vivian would continue to perform these acts in her service to St. Joseph's and her fellow man. In her spare time, she was an avid gardener and traveler. At her home, she took great pride in her many colorful flowers and home-grown fruit and vegetables. Vivian would also go on to take many trips abroad with her family and friends. Of all that she has done, it can safely be said that nothing brought her more joy than her six grandchildren - Myisha, Michelle, Robert S. Jr, Devin, Eric, and Michael Jr. Doting and spending time with them, was something she would let no one prevent her from doing. She is preceded in death by her mother and father - Isabelle and Burley Willis; her husband Robert B. Priest; her daughter Michelle Priest; her sisters - Bernice Willis, Geals Willis, and Gwendolyn Suber, and her brother Edwin Willis. She is survived by her sons - Michael Priest Sr. (Brenda) of Oakland, California and Robert S. Priest Sr. (Cola) of New Castle, Delaware; her six grandchildren - Myisha Priest, Michelle Neal, Robert S. Priest Jr., Devin Priest, Eric Neal, and Michael Priest Jr.; and five great-grandchildren. Also left to remember her, are her cherished niece and great-nephew, Rosalie Suber and William Willis - who both demonstrated unwavering dedication and love in caring for her in her final years. Acknowledgement The Priest Family would like to thank Earl Foster's Funeral Home, St. Joseph's Church, and all family and friends for their kind thoughts and prayers.

Obituary After a full and joyous life, the Lord saw that she was tired, and welcomed his faithful servant and devoted daughter, Vivian E. Priest, age Ninety-Seven, into his arms. Vivian was born on March 3, 1923 in Wilmington, DE, to Isabelle... View Obituary & Service Information

The family of Vivian E. Priest created this Life Tributes page to make it easy to share your memories.

After a full and joyous life, the Lord saw that she...

Send flowers to the Priest family.