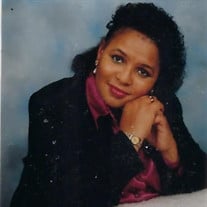 Vidilia Burnadette (Glascoe) McDuffy, daughter of the late Robert “Daddy Bobby” and Lucille (Gilbert) Glascoe, was born on February 15, 1948 in Chester, PA. She departed this life on Thursday afternoon, May 20, 2021 at Crozer Chester Medical Center. Vidilia, also known as “Dilly” to her family and friends, was educated in the Chester School System. She later went on to work for the Chester Upland School District for 38 years, retiring in 2004. She was a dedicated employee, but always believed that family and friends were the most important aspects of life as those who knew her can attest. She became a member of Temple Baptist Church as a child and was active throughout her teen and young adult years. She met her future husband, Gregory L. McDuffy, Sr., as a child and they were married October 27, 1973. They were blessed with three children, Lauren B. McDuffy, who predeceased her mother in 1975, Erin P. McDuffy and Gregory L. McDuffy, Jr. Dilly was described by her late grandfather, Lee M. Gilbert, as a happy child and he called her his “queen”. She was easy going, sincere and usually said exactly what she thought, so you never knew what was going to come out of her mouth. Though she was struck with polio as a child, her parents raised her to be independent, something she guarded fiercely until her passing. She was a daredevil at times and generally willing to try new experiences. Dilly adored music, television and film from many eras and genres, but westerns held a special place in her heart having watched them with her father as a child. She loved going out and was an avid shopper who could always find the little things you never knew you needed until she gave them to you. She was a charitable and empathetic soul that couldn’t stand to see anyone mistreated, particularly children. She always tried to do for those who were in need. Having been afflicted with cancer twice among other hardships, she knew what life could throw at you and she was a fighter. A devoted mother, wife, sister, daughter, aunt, godmother and friend, her thoughtfulness, generous spirit and exuberant personality will be sorely missed. She leaves to cherish her memory a husband of nearly 48 years, Greg Sr. of Logan Twp., N.J., a daughter and son: Erin and Greg Jr. of Logan Twp., N.J., sisters: Shereen P. Glascoe of West Deptford, N.J., Carmen “Peaches” White of Wilmington, D.E., aunts: Carol (Gilbert) Minor (Clarence) of Fort Washington, M.D., Carrie Novella Pittman of Chester, P.A., Adelaide “Kitty” Glover (Anthony) of Sharon Hill, P.A., Clara Mae (Sexton) Glascoe of Murrieta, C.A., Florence Glascoe of Aston, P.A., sisters and brothers in-law, a host of nieces, nephews, cousins, godchildren, and friends. Lovingly Submitted, The Family

The family of Vidilia B. McDuffy created this Life Tributes page to make it easy to share your memories.

Send flowers to the McDuffy family.