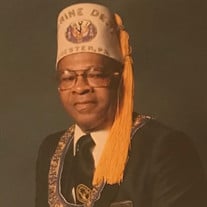 Sylvester “Dickie” Wilbur Dale was born in Chester PA on July 27, 1930 to John Henry and Lillie Dale. He transitioned to his new home on Wednesday June 30, 2021 at his home with his family at his side. He attended Watts Elementary School, Douglass Junior High and Chester High School (Class of 1948). He was a decorated member of CHS Track and Baseball teams. He was also inducted in the CHS Sports Hall of Fame for Track. Dickie enlisted into the United States Air Force in 1949 and was honorably discharged in 1953, where he proudly served in the Korean War. He was so very proud to serve his country as evidenced by the ornament of the American and Military flags that fly freely in his front yard. He was also a long-standing member of Elks Lodge IBP of OEW of Chester PA where he proudly served as Past Exalted Ruler. He enjoyed hosting and marching in the Mother’s Day Parades. Dickie was a long time and good standing member and Trustee St. Luke Community Christian Church of Chester. He was a faithful, strong, and hardworking soldier for The Lord. He was very instrumental in helping so many other people along the way if only by a smile, a wave or a word of encouragement. Dickie was employed by Gash Stull, Baldt & Anchor and Congoleum Corp where he was a Foreman and remained until his retirement in 1995 after 25 years of service. He also was an entrepreneur and The Ultimate Handyman. He had his own Refrigeration and Air Conditioner repair business along with constantly renovating his home with his own personal touch. He has a complete library of Do-It-Yourself books and successfully taught himself carpentry, masonry, electrical, etc. You could always find him tinkering around in his garage or “under the porch” building or repairing something. In the summertime he would work in his yard and in the winter he would work in the house. He never sat still and was always busy doing something. And if he couldn’t find something for himself to do he would find something for someone else to do. He ALWAYS had a project that needed to be completed YESTERDAY. He would often say, “An idle mind is the Devil’s workshop” and “Why put off for tomorrow what you can do today. Because tomorrow is not promised.” But each project was a teaching moment for him and learning experience for us. Anyone who knew Dickie knew that he LOVED his yard TREMENDOUSLY!!! He was always PROUD of the upkeep and was extremely METICULOUS of how his grass was cut and bushes were trimmed. The only yard in Chester that had fresh green grass all winter!!! You could often ride by and see him sitting on his porch and wave to everyone as they walk, run or ride by. He always had a kind word for everyone. He was always the prankster, especially with hiding away just waiting to jump out with his gorilla mask. He was also an AVID Dallas Cowboys Fan…He LOVED his Cowboys win, lose or draw!!! He was also an avid supporter of Chester High School Clippers. He was a proud member of “The Old Heads” Club and was a staple at many sporting events. He was predeceased by his parents John Henry and Lillie Dale, sisters: Catherine Oakley-Beauford, Bessie Gaines, and Bertha (Cittie) Cannon; One brother: Henry Dale; One son: Lynn Derrick Wright; Mother and Father-n-law: Mary and Joseph Dean, Brother-n-law: James Wilson, Son-n-Law Thad Womack Jr. and a host of nieces, nephews and cousins. He is survived by his Wife Irene Dale, Son: David Dale (Kimberly); Daughters Valerie Dale-Womack, Tracye Dale-Williams (Ray), Charlene Flowers, Cassandra King, Joyce Flowers, Nephew: Charles Oakely, Daughter-n-law: Sheila Wright and host of grands, great-grands, great-great grandchildren, nieces, nephews, cousins and friends. Lovingly Submitted, The Family Join Zoom Meeting https://us02web.zoom.us/j/89244910406?pwd=Y28vOGNLWm5iN0d0QjZkZ1pPWWNSUT09

Sylvester &#8220;Dickie&#8221; Wilbur Dale was born in Chester PA on July 27, 1930 to John Henry and Lillie Dale. He transitioned to his new home on Wednesday June 30, 2021 at his home with his family at his side. He attended Watts Elementary... View Obituary & Service Information

The family of Sylvester W. Dale created this Life Tributes page to make it easy to share your memories.

Send flowers to the Dale family.