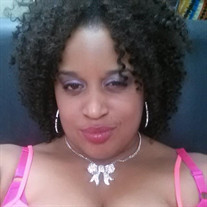 Shakeerah Sherelle Whitaker, affectionately known as “Kitty” was born on July 28, 1984. She went home to be with the Lord on February 26, 2019 after a brief illness. She was the daughter of Gloria Bailey-Whitaker and the late Rufus Whitaker. She was educated in the Chester Upland School District and graduated from Chester High School in 2003. In school, Shakeerah was heavily involved in music and theater. She loved to sing and act, and anyone who knew Shakeerah, knew she was a natural born actress. In fact, she received countless awards and accolades for her musical and acting abilities. During her teenage years, Shakeerah was in several pageants including the Miss Teen Chester Pageant were she always showcased her singing talent. She was apart of the Darlington Fine Arts Program, where she starred in many theatrical productions including the classic play “The Wizard of Oz”. Shakeerah was a member of Temple Baptist Church. During her years growing up in church, Shakeerah sang on the Training Choir, Christian Choral Ensemble, the praise dance team, was a member of the National Junior Deacon’s Association where she traveled to Virginia for the convention each summer with the Late Deacon Pat and Deaconess Arnetta Thomas. Shakeerah looked forward to traveling to Virginia each summer, meeting up with all of her friends she through her years of being apart of the convention. It is believed that this was her starting point of becoming an international social butterfly ,because she made friends everywhere she went. In church, Shakeerah was known for her solo she sang on the choir “I Just Want to Praise You”. No one sang this song like Shakeerah and after years of her singing that song it became “The Shakeerah Song” and no other choir members were able to lead that solo. Shakeerah was really the “Jill of all trades”. Aside from acting and singing, she spent her time doing hair. Upon graduating high school, She went to Venus Beauty Academy to pursue her cosmetology license while working at Crozer Chester Medical Center in the Physical Therapy Department. Shakeerah loved to help people in any way. In fact, the majority of her years of employment were spent dedicated to helping others. Upon leaving Crozer, Shakeearh worked at CADES for several years. She loved this job and the people she worked with. She would always come home with stories about the consumers and her coworkers. It seemed like she never worked when she was employed there, because all she talked about was the fun they would have, from the proms, theme parties, cookie exchanges, Pollyanna’s, birthday parties, etc. It was always a good time. Shakeerah loved the consumers she cared for. They would even cry when her shift was over to go home. Before leaving this earthly vessel, Shakeerah was a home help aide for a private company. Shakeerah put the “social” in social butterfly. She is known all over and it would be safe to say that she knew no strangers at all. Whether she was in Philly, Jersey, Baltimore, DC or Virginia, there was always someone that knew Shakeerah, and as long as she knew someone when she traveled places, trust and believe they were going to take care of her and whoever came along too. Because of her being so social, it was only right for her to be apart of a social club. Shakeerah was a member of the So Seductive Executive Riders Social Club, where she held the title of the club’s secretary. Each and every time she linked up with her club members it was a party. It wasn’t a party if Shakeerah wasn’t there. She was the life of the party wherever she went. Shakeerah loved her family. She was the devoted mother of Damari Whitaker. This little boy was Shakeerah’s world. She loved, adored and spoiled him to no end. When Damari came into this world, her life became all about him. She enjoyed playing games with him, reading books to him, teaching him his letters, numbers, colors, and shapes. Lets not forget how Shakeerah pretty much forced singing on him. Damari and Shakeerah loved to sing together and you can find countless duets of them on social media. One of their favorite songs to sing together was “Baby Shark”. In fact, the day before her going home to glory, Damari was singing and singing hard. Shakeerah was all about family. She always took the time to visit her family no matter what. If you were in need and Shakeerah had it, she gave it to you. Oh but trust and believe, as giving as she was to those she love, she would go to battle for those she loved also. Shakeerah had no filter, and if you crossed those lines, you better be prepared for what Shakeerah would say. Shakeerah certainly lived her life. She let no grass under grow under her feet at all. She always had somewhere to go and something to do. In fact, she was planning a trip for her 35th birthday to Jamaica this summer with her best friend Antwainette and a few other girlfriends. Of course she couldn’t leave Damari out, she was planning to take him to Disney World this summer too. Shakeerah leaves to cherish her devoted mother Gloria Bailey Whitaker, her loving son Damari Whitaker, 6 sisters Belinda Whitaker, Jacqueline Whitaker, Theresa Whitaker, Carla (Justin) McFarlan, and Bernetta Whitaker, and Demetria Garrett. 4 brothers; Rufus Whitaker, Jamar Whitaker, Sonny Whitaker and Hameen Carroll, best friend Antwainette Powell, close cousin Tiffany Flamer, and a host of nieces, nephews, family and friends.

Shakeerah Sherelle Whitaker, affectionately known as &#8220;Kitty&#8221; was born on July 28, 1984. She went home to be with the Lord on February 26, 2019 after a brief illness. She was the daughter of Gloria Bailey-Whitaker and the late Rufus... View Obituary & Service Information

The family of Shakeerah Sherelle Whitaker created this Life Tributes page to make it easy to share your memories.

Send flowers to the Whitaker family.