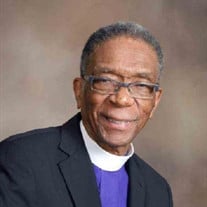 A Traumatic Beginning, A Tranquil Transition Let us tell you what&#8217;s in between&#8230;. On October 15, 1936, while Deacon William Ernest Ellis and Clara Ellis were excitedly awaiting the arrival of their eighth child, Clara went into... View Obituary & Service Information

The family of Bishop Samuel W. Ellis created this Life Tributes page to make it easy to share your memories.

A Traumatic Beginning,
A Tranquil Transition
Let us tell you...

Send flowers to the Ellis family.