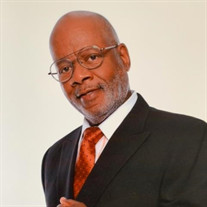 Life Story Robin David Rudisill was born on September 12, 1951 at Fitzgerald Mercy Hospital in Darby, PA. He was the 5th of eight children born to the late Preslee & Thelma Berkley Rudisill. He departed this life suddenly on Saturday August 21 , 2021 at Mercy Fitzgerald, Darby, PA. Rob was raised in Darby and attended Ridge Avenue Elementary school, Darby-Colwyn Jr. and Sr. High schools and graduated in the class of 1970. He also attended Embry Riddle Aeronautical University in Daytona Beach, Florida from 1984-1988 to obtain a Bachelor of Science Degree in Professional Aeronautics. Rob was baptized at an early age at First Baptist church of Darby, by the late Reverend Roland V. Jones. Later in 1993 he recommitted his life to the Lord and accepted the right hand of fellowship under the pastorate of the late Reverend David D. Lee. More recently he became a member of Enon Tabernacle Baptist Church in Philadelphia under the pastorate of Reverend Alyn E. Waller where he was a member of the Usher Board. Rob was also a free & accepted Mason. Rob joined the U.S. Armed Forces in 1977 and served his country until 1981. When his tour of duty was complete, he continued to reside in Germany becoming a civilian Air Traffic Controller at Hanoi Army Airfield and Manheim Pirmasens Army Heliport on the French Border, from 1981 through 1989. He returned to Pennsylvania in 1989 and in 1993 he wed Wanita Wilson. Two children were born to this union: Ayana Nicole & Robin David Rudisll, Jr. After the dissolution of the marriage, he later married Antoinette Arnold on December 7, 2014. They set sail and frequently enjoyed traveling together to the far off reaches of the world. Rob's employment ventures were various starting in 1989. He worked as a self employed carpenter for a number of years; at Pierce Archives in Sharon Hill, PA and for UPS. In 2000 he became a Locksmith and Master Carpenter at Haverford College until his retirement in 2017. Rob was an avid Philadelphia sports fan but he whole-heartedly supported the Philadelphia Eagles. His hobbies were fixing, creating, and buying things and he did all of the extensive renovation work on a house that he purchased, further increasing its real estate value. His sense of humor was beyond measure; a real funny man that would have everyone laughing as soon as he opened his mouth, though he wouldn't be laughing, you would be in stitches. "Rob, we love you and we're going to miss you greatly but we believe that...God loved you more". To God Be The Glory! Rob leaves to cherish his memory, his wife Antoinette; one daughter, Ayana and one son, Rob Jr. (wife, Italia); step-daughter, Colette Pugh; grandchilden, Ralo, Levi, Ari & James; seven siblings, Renee Grundy of New Mexico, LaVerne DeShazor, Madeline and Jeanette Rudisill of Pennsylvania, Preslee Rudisill Jr. (wife, Doris) of North Carolina, Angela Thomas of Delaware, Marc Rudisill of California; brother-in-law Wendell Arnold (wife, Philissa) of New Jersey; and a host of nieces, nephews, cousins, and many friends. Lovingly submitted The Rudisill Family "In lieu of flowers, please make contributions to the Robin David Rudisill, Sr. Memorial Scholarship Fund, payable to "TBC" - send to Tabernacle Baptist Church, 150 E. Second Street, Burlington, NJ 08016. Please reference (RDRudisill Memorial Scholarship). Thank you.

Life Story Robin David Rudisill was born on September 12, 1951 at Fitzgerald Mercy Hospital in Darby, PA. He was the 5th of eight children born to the late Preslee & Thelma Berkley Rudisill. He departed this... View Obituary & Service Information

The family of Robin D. Rudisill Sr. created this Life Tributes page to make it easy to share your memories.