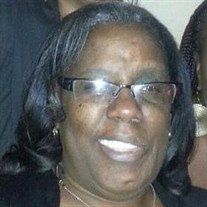 Robin Lenore Costen was born February 26, 1961 to Lavern and Robert Costen Sr in Philadelphia, PA. She attended George Brooks and Samuel Daroff Elementary Schools prior to moving to New Waverly, TX with our mother, Lavern and father, William Cain, Jr. She completed her high school education in New Waverly, TX. Robin held down numerous jobs in Texas, before returning to Philadelphia after a horrific car accident. Upon her return she found employment at Ms. T’s Bakery in West Philadelphia, for numerous years. She also held a position with an office cleaning agency until her health dictated her retirement. Robin loved being with her family and having a good time. All of her nieces and nephews were her favorites. She was the life of the party even after her health started to deteriorate. At any given time, you can catch her at a party “Walking the Floor!”. Now, anyone that knew her knew what that meant! Robin is preceded in death by 4 brothers: Robert Jr., Anthony, Gregory, and Reginald. 2 nephews: Vern Jr., Michael Sr. and Grand Nephew Shawn and the bonus man in her life, our father, William Cain Jr. She leaves to cherish her memories, her mother, Lavern, father Robert Sr; sisters, Linda (John) Justine (Vern) , Melody, April, Monica, and Tammy.; Brother: William (Latasha) 11 nephews, 7 nieces, numerous Grand and Great-Grand nieces and nephews, a host of cousins and friends. Robin cherished the relationships she had with, Robin Shippen and Patty Strickland, childhood friends since the age of 5; and Gloria Jordon.

The family of Robin L. Costen created this Life Tributes page to make it easy to share your memories.

Send flowers to the Costen family.