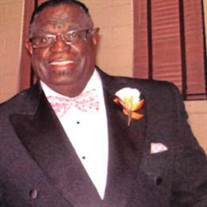 Legacy of Life and Love for Robert (Bobby) Barnes Sr. It is with Great Jubilation that the family of Robert (Bobby) Barnes announces his transition on Wednesday December 8, 2021 with his beloved Sandy right by his side. He was born to the late Leon and Martha Barnes on October 8, 1944 in Newark NJ. Robert attended the Chester School System and graduated from Chester High School Class of 1963. He was baptized at an early age at Bethany Baptist Church in Chester and was reared up at Shiloh Baptist Church under the pastorship of Rev L.J. Freeman. Robert was a member of Freedom Baptist Church where he served on the Trustee and Deacon Board for many years, he was Ordained as a Deacon in 1986. Robert attended Philadelphia College of Bible, to get a better systematic study of the Bible and in his later years he returned back to Shiloh Baptist under the pastorship of Rev E. Ervin Millsaps, where he served on the Deacon Board since 2003 For those that know Robert Barnes, knew that he loves the Word of GOD with every ounce of his being, you could see it in his walk and you could certainly hear it in his talk. He also was a Sunday School Teacher and on the Sundays he taught, there was never a dull moment in his class. He would follow the study lessons but he would always manage to say something about his Daughter Lisa, his Son Robbie, his Wife Sandy and last but certainly not least His Money, his class was always the largest Sunday School Class at Shiloh. Robert served in many positions with the Brotherhood Breakfast Association of Churches and was President for 2 Terms. He worked and served continuously and tirelessly on the Scholarship Committee to make sure that the Youth/Students from various different churches were able to receive Financial Assistance as they entered College to further their education. Robert was a former member of Franklin Lodge # 58 where he received his Masonic Diploma in 1987; he also was an avid Philadelphia Eagles Fan, also after working 38 years at General Chemical in Claymont DE., where he started as a laborer and many other positions he retired as a Master Pipe Fitter 1st Class Robert is preceded in death by his Parents, Leon and Martha Barnes, 3 brothers Leon, Ronald and Leroy. Robert leaves to cherish and honor his memories his devoted wife and best friend of 21 years Sandy, his daughter Melissa Barnes of Ft. Washington, MD and son Robert Barnes Jr.(Ronnette) of Hanover MD. He also has been blessed with another son Brion Dickerson (Janirah) of Wilmington DE, and a daughter Felicia Shamburger (James) of New Castle, DE; 2 sisters, Liz Bumper, Sheila Barnes 2 brothers, Thomas Barnes and Clarence Barnes, several Grandchildren, Great Grandchildren, a host of in-laws, nieces, nephews, cousins and friends, one special longtime friend Sam Carlton, when they would see them coming they would say (Swiss Boom Bang the Project Gang)!!! There are no words to express the extra special care and support given by 2 Special Nieces who helped care for him Debra and LaDondra Terry whom he loved and Deacon Darnell Searcy. His earthly presence is no longer with us, but his spirit will live on through his Family Forever; His favorite scripture is Matthew 6:33 and his favorite song is Blessed Assurance. Robert fought a very challenging battle, but God showed us favor to be able to go through this Journey together and he would always say ”Don’t Worry Sandy God Got Us” The last 2 weeks of his life he would often call out and say “God Help Me to Come Home to You, Please Take My Hand” and God did just that on December 8, 2021 God grabbed his hand !!! In lieu of flowers, donations may be made to Delaware Hospice https://www.delawarehospice.org/donate/memorial-gifts/

The family of Deacon Robert E. Barnes Sr. created this Life Tributes page to make it easy to share your memories.

Legacy of Life and Love for Robert (Bobby) Barnes Sr.

Send flowers to the Barnes family.