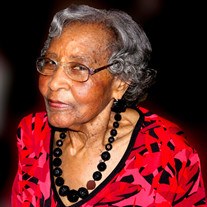 Her Story Rebecca Margaret Hicks Roots was born November 9, 1924 to the late Roxanna Shepard Hicks of Delaware and Walter Hicks of Maryland in Chester, PA at home to her loving parents. She married Joseph Thomas and in 1939 they bore a son Elmo Hicks, former Master Gunnery Sergeant for the US Naval Marines. Later in 1957 she met and married her second husband Threston C. Roots after a one day engagement. Together they raised Stefan Roots with love and adoration becoming an amazing example of marriage, devotion and love even after Threston’s passing. Rebecca had a stern and loving spirit which garnered respect and reverence from all she encountered. She loved her family dearly and affectionately displayed photos of them for all her guests to see. She was especially fond of holidays where she would prepare and host massive meals for the whole family and their children. She carried on this tradition well into her later years. She had a love for fashion and traveling with her husband and their fraternal organizations. Her favorite destinations were Honolou and Maui. Her devotion to her husband and family were unparalleled just as her home was always meticulously kept and her dress especially stylish. Despite being known for her beautiful hat and suit collection, Rebecca was humble and never boastful. Her spirit was modest. She was a hero. A woman who made hard choices with grace and ease. She was an amazing wife, daughter, mother, sister, aunt, grandmother and community leader. There was nothing she wouldn’t do for her family. She was an amazing example of class and exemplified throughout her life the definition of a discerning and virtuous woman. A woman of faith, integrity, devotion, loyalty, kindness and generosity, Becky was an irreplaceable pillar of her family and community and will be truly missed. Throughout the years Rebecca has contributed so much to her community. Her and Threston owned and managed a restaurant on 3rd St. between Tilghman St and Central Ave for five years. She worked on numerous committees, chairing several of them such as a member of the Pastor’s Aid and the Olee Barbour Missionaries. Rebecca’s fraternal affiliations include Past Worthy Matron Leah Chapter #27, District Deputy Grand Matron of 2nd OeS District Order of Eastern Star, PHA (4 years), Past Loyal Lady Ruler of Chester Assembly No. 30 Order of the Golden Circle, Past Commandress of Minaret Court #154 Daughter of Isis, Imperial Deputy of the Oasis of Chester (12 years) and First Royal Perfect Matron of Zerubbabel Court #6 Ladies of the Circle Perfection, PHA-PA. Rececca Margaret Hicks Roots returned home to be with her heavenly father on April 21, 2021 surrounded by her family and friends. Always exuding care for everyone around her, she will be remembered as a beacon of kindness and sincerity. Becky leaves behind a legacy of love. Her memory will be cherished by her sons Elmo Hicks and Stefan Roots; five granddaughters, Veronica Hicks, Veta Roots, Carmyn Roots and Makeda Roots, Alise Roots; two grandsons, Michael Hicks and Raymond Traylor; four great granddaughters, Kayasha, Skyiel Marri, Langston Simone, and Kerri Kennedy; two great grandsons, Tristan Terrance and Liam Taj; one sister, Dorothy Harris; one brother, Linwood (Jackie) Hicks and a host of nephews, nieces, cousins, and honorary children and grandchildren. We would like to give special thanks to those who have made her later days easier for Becky and the family. Thank you Constance “Connie” Cobb and Marceline “Marcy” Andrews who have spent every day caring for her and making her last days sweet and light.

Her Story Rebecca Margaret Hicks Roots was born November 9, 1924 to the late Roxanna Shepard Hicks of Delaware and Walter Hicks of Maryland in Chester, PA at home to her loving parents. She married Joseph Thomas and in 1939 they bore a son... View Obituary & Service Information

The family of Rebecca M. Roots created this Life Tributes page to make it easy to share your memories.

Send flowers to the Roots family.