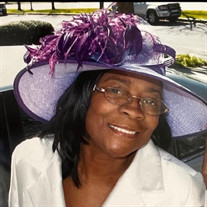 Her Life Story Ramona Hickman was a faithful and loving mother, a dedicated Armor Bearer and a beautiful spirit. In 2016 she began a battle with cancer in which she fought hard and kept the faith, while praising God on her bed of affliction. Early Saturday Morning on December 18th, Momo yielded to the will of the Lord. She took her flight, leaving behind her afflicted body not in defeat but in total victory. She cast her cares on Christ and quietly slept away in the care of the Staff at the Simpson House. She fought a good fight. She finished her course. Ramona was born May 3rd, 1947 to John and Ramona Fulton and was affectionately known as “Momo”; a nickname which was given to her by the best friend of her father. She was one of four siblings: John, Brenda, and Lenora. She received her formal education in the Philadelphia School District and graduated from West Philadelphia High School. Ramona was a success story! As a teenage mother, she overcame many obstacles. She secured a good job at the age of eighteen and worked her way up through the ranks to become the first black female General Man- ager at the Airfield Post Office. She was an inspiration to many people and after thirty-seven years of service she retired from the USPS. As she was beginning to establish a successful career, she soon met Robert Hickman. Bob and Ramona tied the knot in August of 1984. Bob loved Ramona’s cooking and she loved his humorous nature. They loved to travel to various places especially Jamaica. Ramona remained faithful to him until his death in November of 2013. Ramona was the pillar of her family with a kind and giving heart. She loved her son and grandson dearly, and doted on all her nephews, nieces, siblings and made sure that her mother was well taken care of. Aunt Momo was known for giving the best gifts on birthday’s and Christmas. She treated all of her nieces and nephews like a second mother, often taking them on trips to various places such as Myrtle beach and Disney world. She was a very family oriented person and was so proud of the accomplishments of her grandson, nieces, and nephews. Her brother and sisters meant the world to her. Ramona was an avid sports fan, due to her son and brother being passionate about the Philly Sports teams. The Eagles and Sixers were her specials. MoMo, her son and brother became sports buddies and would watch all the big games. MoMo would be in one room, her son in the other room and her brother John would join in the conversation by phone. They would cheer talk about the game together and be critical, or super excited about the results. Ramona was a strong traditional Christian woman, a hard worker and worked her way to a stable comfortable life. She cared deeply and would do anything for her son and grandson. She was a lover of the arts, jazz, orchestras ensembles etc. and she was an excellent baker! Ramona was a blessed woman, because she accepted the Lord as her personal savior and became obedient to the plan of salvation. As she soared naturally she also soared spiritually. Allowing the Lord to use her. As the scripture says, “He uses us according to our several abilities.” She was a natural and spiritual leader. She was a valued blessing to the people of God and the glue that held our family together. Ramona was a dedicated and faithful member to her local churches and The Greater Highway Church of Christ, Inc. She received the Baptism in Jesus name at the Greater Highway Church of Christ in Philadelphia, Pa where Bishop Andrew J. Ford, Sr was the Pastor. The first Church that she attended was The Greater Highway Church of Christ, Sharon Hill, Pa under the leadership of Pastor Edna D. Johnson, where she served as the Pastor’s Aide President and received the gift of the Holy Ghost. After Pas- tor Johnson took her rest, MoMo remained committed to the works of God, transitioning to the Highway Church of Christ Pillar and Ground of Truth, Chester Pa under the leadership of Bishop Carl Johnson, Sr. She continued to thrive spiritually and served as Pastor’s Aide President and the Coordinator of the Cooking Staff. MoMo was the #1 Cook, Mother Fulton was the supervisor and Lenora was the string bean lady. Before she helped initiate the Catering Services of the church, she would assist various auxiliaries with providing dinners for their projects. She was large and in charge, but humble. She worked tirelessly and never groaned or complained. She was a team player, who showed her concern for the ministry. MoMo followed the leading of the Lord and later became a member of Brighter Day Greater Highway Church of Christ, Inc. under the leadership of Pastor Rosie M. Williams where she continued to grow in grace. There she served as a member of the Pastor’s Aide Committee, a Missionary and the Assistant Sunday School Teacher for the Adult Women’s Class. She also held the following National Offices in The Greater Highway Church of Christ, Inc., National Coordinating Staff, Staff’s Liaison for the Sunday School Department, Member of the National Hospitality Staff. She served well with excellence in everything she touched. Ramona was one of the sweetest, loyal, generous people you could ever meet. If anyone needed anything she was there. Always willing to listen, laugh and love. She will be missed but never forgotten. She leaves to cherish her memory, the apple of her eye, her son, Oliver, her pride and joy, her grandson Cordell, her beloved siblings, John Fulton, (Myra) Brenda Beckett-Massey (Howard), Lenora Owens, three nieces, eight great nieces, 5 nephews, 7 great nephews and a host of cousins, church family and friends.

Her Life Story Ramona Hickman was a faithful and loving mother, a dedicated Armor Bearer and a beautiful spirit. In 2016 she began a battle with cancer in which she fought hard and kept the faith, while praising God on her bed of affliction.... View Obituary & Service Information

The family of Ramona Hickman created this Life Tributes page to make it easy to share your memories.


Ramona Hickman was a faithful and loving mother,...

Send flowers to the Hickman family.