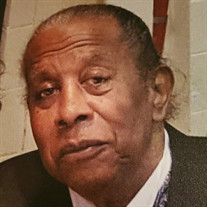 The Story of Ralph Justice Ralph was born on March 10, 1945. In Sparta, GA. He is the first born of two sons to the late Horace and Susie Mae (Traywick) Justice. In 1947, Ralph and his family moved to Detroit, Michigan, where he attended Elementary School. Later they relocated to Milledgeville, GA. and Ralph attended Boddie High School. He was a member of the varsity basketball team and the French Club. Ralph’s outstanding personality and charm earned him the nickname “Rolf” He graduated in June of 1962. After high school Ralph attended Albany State University to pursue a career in dentistry. However, he was inducted into the U.S. Marine Corps. He served in the Marine Corps, during the Viet Nam era from January 28, 1966 to Jan. 27, 1968 and received a National Defense Service Medal, Expert Rifle Badge, Good Conduct Medal and an honorable discharge. Ralph attended St. Luke Baptist Church. As a young child, he would stand out on his porch and his friends would gather around him to hear him preach. After being discharged from the U.S. Marine Corps, Ralph moved to Pennsylvania with his cousin. There was employed at the Scott Paper Company in Chester, which later changed the name to Kimberly Clark. He served as supervisor in the Napkins department. He attended Cheyney University graduating in December1980, with a degree in Liberal Arts. Ralph was very enterprising. He started “The Just Right Cleaning Company”, where he cleaned office buildings in Media and throughout the Delaware County. He also worked as a car salesman for the RYAN Lincoln Mercury Car Dealership. On February 10, 2018, Ralph married his college sweetheart. He joined New Life Ministry International. He was a dedicated member, always inviting people to attend church with him. He loved to pray and read the bible. His favorite scripture is Psalm 91. He is a man of vision. His desire was to do something to help fellow veterans. Ralph finished his course, and on December 9, 2021, He was ushered into the presence of the Lord! Ralph leaves to cherish his memories, his wife, Kathryn, a blended family: son, Dr. Breyon Justice (Walidah). Daughters: Courtney Sprague (Aaron) Jamie Horton, Sonya Graves (Howard), Dawn Davis (Glenn), Djuana Davis (Stanley). Brother, Dr. Roy Justice (Sarah) Grandchildren: Imevar, Izzy, Indigo, Samara and many more. A host of Nephew, Nieces and Cousins. His very close cousins Lucious Hawkins, Mary Moore, Annie Devero, who have been very supportive. Adopted daughter Michele Rice.

The Story of Ralph Justice Ralph was born on March 10, 1945. In Sparta, GA. He is the first born of two sons to the late Horace and Susie Mae (Traywick) Justice. In 1947, Ralph and his family moved to Detroit, Michigan, where he attended Elementary... View Obituary & Service Information

The family of Ralph Justice created this Life Tributes page to make it easy to share your memories.

The Story of Ralph Justice

Send flowers to the Justice family.