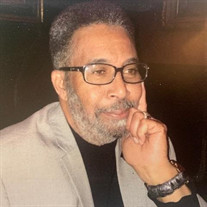 Powell Julius Bernhardt III was born on October 10, 1946, in Philadelphia, PA, the oldest of four children to the late Powell Julius Bernhardt Jr. and the late Vera Edwards Bernhardt. He was the eldest and proud brother of the late Richard Glenn, the late Kenneth Andre, and is survived by his devoted sister, Marlena. Powell married Barbara Newman and from this union two sons were born, Damen Lamar and Eric Lamont. On June 28, 1975, Powell married Charlotte Gail Robinson, and from this union two sons were born, Powell Julius, IV and Marcus Joseph. They have six grandchildren, and two great-grandchildren. Powell, affectionately called “Palley” and “Butchie”, was raised in Darby Township, PA attending Holy Spirit, Monsignor Bonner, Darby Township and graduating from Ridley Township High School in June of 1964. He entered the US Air Force in July 1964, serving initially as an Air Police and later in Supply Management. Palley served in Vietnam from 1967-1968 and was honorably discharged in 1968. Palley attended Philadelphia Community College and Temple University, while employed at the US Postal Service. He graduated from Temple in 1977 with a Bachelor of Business Administration, majoring in Accounting. He was initiated into Beta Alpha Psi a scholastic and professional honor fraternity formed to encourage and give recognition to scholastic and professional excellence in the field of accounting. Palley was employed by the US Postal Service from 1970-2011 (41 years). Including his service in the Air Force, he retired with 45 years in Federal Civil Service. He held many positions in his postal care journey from postal clerk, accounting tech, supervisor mails, postal operations analyst, facilities specialist, through to retiring as a purchasing and supply management specialist. Powell worked in postal purchasing for some 25 years receiving a Lifetime Certification as Certified Purchasing Manager (CPM) from the Institute of Supply Management. Brother Powell J. Bernhardt III joined Linwood Lodge #87, Most Worshipful Prince Hall Grand Lodge of Pennsylvania, in August of 2010. He immediately began his journey to the East, as an active servant in Prince Hall Masonry. In May 2012, he was recognized as Linwood “Master Mason of the Year” for his dedicated and meritorious service. He served as Worshipful Master from 2015-2016. In October 2016, he received his current appointment to Most Worshipful Prince Hall Grand Lodge of Pennsylvania, from the Most Worshipful Grand Master, Malcolm E. Harris #58, as the Worshipful Grand Statistician. In May, 2017 PM Bernhardt received recognition from Linwood Lodge #87 and the Most Worshipful Prince Hall Grand Lodge of Pennsylvania, for his Masonic service. In June 2017, he was recognized by Charles E. Gordon Consistory #65, as the “Scottish Rite Mason of the Year” for his service promoting Scottish Rite Masonry. In May of 2019, he was created and elevated to the 33rd degree and last degree, as a member of the Basil L. Sands Class. Powell’s community service includes having volunteered with the Chester Biddy League as coach, referee, and assisting in taking a Chester team of 10 year old boys to Puerto Rico, where they finished in third place. Powell was a member of Canaan Baptist Church where he served on the Capital Campaign Ministry. Formerly a faithful member of Murphy A.M.E. Church, where he served as a Trustee, Steward, President of the Sr. Usher Board, and a Young Men’s Bible study teacher. He was a born-again Christian believing that “only what you do for Christ will last.” His favorite scripture was Psalm 27, verse 14 – “Wait on the Lord: be of good courage, and he shall strengthen thine heart: wait, I say, on the Lord.” Powell was affectionately call “Unk” by his nieces and nephews, and “Pops” by his daughter in love, whom he adored. He was quiet in his temperament, unless he was watching sports… then he could be heard for miles cheering for his favorite sports teams. He was also quite skilled in his “street smarts” as he placed wagers on his picks, and masterful at selecting winners! In fact, a few years prior to June 1975, he selected a “winner”, his lovely bride Charlotte Gail. Everyone admired how they publicly loved each other; sealed their nuptials, raised four sons, supported their nieces, nephews, and grands, while taking time to travel around the globe. They could often be seen as the “best dressed” couple from barbeques to cabarets. Palley had a way of just looking at Charlotte and melting her heart… and he didn’t care who was watching because his love was “on-stage” for his wife, and queen. No truer words can be said than Powell was a man’s man, a committed man, a Christian man, and a gentleman. With all his accomplishments, he always gave God the glory in and outside the church with his time, talents, and financial support. Powell leaves to cherish in his memory, his loving and devoted wife of 46 years, Charlotte Gail. His four sons: Damen Lamar, Sr.(Kiesha), Eric Lamont (Michele), Dr. Powell Julius IV, Marcus Joseph (Kelly); grandchildren: Damen Jr., Darius, Dymin, Dejahna, Jy’Mire and Marcus Jr. (MJ); great-grandchildren: Chase & Lyric. A devoted sister Marlena Bernhardt; godchildren: Karen Woodland, David Chandler, and Bradley Smith; Sister in-laws: Shirley Sikes and Bernadine Bernhardt; a brother in-law- Caleb Walker; loving neighbors who were like “second parents” – Gladys Wittset and James (Duttie) Williams; best friend: William (Applegate) Waller; his beloved Sharon Hill family, the 100% Club, his Masonic Brethren, church family, and a host of nieces, nephews, cousins, and cherished friends. Lovingly submitted, The Family “The ultimate measure of a man is not where he stands in moments of comfort and convenience, but where he stands at times of challenge and controversy.” ~ Dr.Martin Luther King Jr. https://us02web.zoom.us/j/6848386118?pwd=aEowQzdmYnVRcnVlc0RJOG8wdk9oUT09 Meeting ID: 684 838 6118 Passcode: 701871

The family of Powell J. Bernhardt III created this Life Tributes page to make it easy to share your memories.

Send flowers to the Bernhardt family.