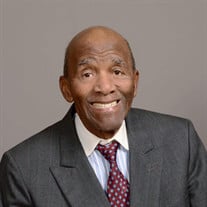 His Life Journey Percy Carter, 98 years old, was born on August 31,1923 to the late Charles and Bessie [nee Childs] Carter in Chester, Pennsylvania and peacefully entered into eternal rest on January 7, 2022, in Middletown Delaware surrounded by family. Percy, nicknamed Jake, grew up in a loving family as the youngest of four siblings. He was educated in the Chester Public School System and had fond memories of the teachers at Douglass School. He enlisted in the United States Army and served in World War II 1943-1946. He was honorably discharged with the rank of Technician Fifth Grade. Soon after returning home, he met the love of his life and married Mary Esther [nee Tankard] in March 1949 that began a journey of love and devotion, lasting for more than 46 years when she suddenly passed away in 1995. He was blessed to father three daughters, Patricia, Susan and Judy. Percy accepted the Lord and united with Macedonia Seventh Day Adventist Church where he was known as one of the pillars of the church serving as a faithful Deacon. He and his wife gave individuals Bible Studies and was instrumental in leading many souls to Christ. He was self-employed as a skilled mason and also operated a janitorial business. He had a strong work ethic and enjoyed staying active. Percy loved his birthplace, Chester, and dedicated many years as a foreman working for the City of Chester retiring at the age of 55. After retiring from the City, he began working for Chester Housing Authority as a Maintenance Supervisor until the age of 71. Eight years ago, he came to live in the home of his daughter Susan and son in love Herb. He made many new friends and enjoyed life there. He was a blessing to their home and to everyone who entered there with his wit and personality. Percy was known for his style of fashion, friendliness, caring quality and his sense of humor. He loved everyone, never spoke negative about anyone, and was loved by all who knew him. He was preceded in death by his parents Charles and Bessie Carter; Wife Mary nee Tankard; siblings Maylor James, Charles Carter, and Mary Gaddis. He leaves to cherish his memory Daughters Patricia Williams [Robert deceased] of Brookhaven PA, Susan Coe [Herbert] of Middletown DE, and Judith Carter of Chester, PA; nine grandchildren Byron Carter [Donna], Wallingford, PA; Carolyn Suzette McMillan, Claymont DE; Waldo McMillan Jr [Amanda], Upper Marlboro MD; Wendy Alleyne [Brian], Wilmington DE; Weldon McMillan, Harlem NY; Herbert Coe Jr, Middletown DE; Robert Williams [Jody], Rochester NY; Chandler Williams [Tracy], Burlington NJ; and Athena Coleman, Chester PA. He is also survived by twenty great grandchildren, many nieces, nephews, cousins and a host of friends.

The family of Percy Carter created this Life Tributes page to make it easy to share your memories.

Send flowers to the Carter family.