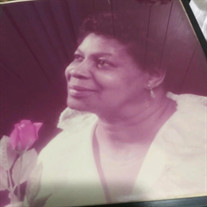 Ola Mae Horton Carr was born to the late Henry Horton and Vergie Logan on December 6, 1924 in Cleveland, Ohio. She was the third of five children. She transitioned to her heavenly home on Sunday, February 13, 2022. Ola was raised in a Christian and spiritual home. The family relocated to Washington, D.C. in 1933 after the passing of her father. She attended the Washington, D.C. school system; after graduating she became employed by the United States Government Printing Office where she met the love of her life, Thomas Carr, and they were united in wedlock in 1944. After working a few years she left the government to start their family. She was an active member of the United House of Prayer for All People Church. In 1965 the family moved to Chester, Pennsylvania. Ola gained employment at Spears Brothers Department Store; then gained employment at Fair Acres Geriatric facility, retiring after 19 years of service. After becoming an empty nester Ola decided that she wanted to keep busy, therefore she decided to volunteer with the Foster Grandparents Program which was located at the Concord Day Care Center, and she was there for 19 years. She was recognized as a very soft spoken, comforting and reassuring person to everyone. She was a great asset to the teachers and staff. A sweet and kind woman who would lend a helping hand to anyone in need. Ola received numerous Recognition and Service Awards. Her mind was still very active and sharp as she enjoyed reading the newspaper, watching the news and her favorite TV programs; Let’s Make A Deal, The Price Is Right, Wheel of Fortune and Family Feud. Ola was a member of First Faith Baptist Church and joined under the leadership of the late Rev. Commodore Harris. She became a Deaconess when her husband, Thomas, was ordained as a Deacon of First Faith Baptist Church and was active until her health began to fail. Ola was predeceased by her husband, Thomas R. Carr, Sr.; son, Ronald E. Carr, Sr.,grandson, Ronald E. Carr. Jr.; brothers: Lee Horton, Wilbur Horton, Leonard Horton; sister, Aileen Wallace and cousin/ brother, Sam Curtis. She leaves to mourn: son, Thomas R. Carr, Jr., Philadelphia, PA, daughter, Joan A. Rice, Chester, PA, grandson, John C. Rice, Jr., Philadelphia, PA, Sons-in-Love, John C. Rice, Sr. and Steven Harper, Chester, PA. and sister-in-law, Vivian Carr, Tampa. Florida; a host of cousins, nieces, nephews, church family and friends. Respectfully Submitted, The Carr Family

Ola Mae Horton Carr was born to the late Henry Horton and Vergie Logan on December 6, 1924 in Cleveland, Ohio. She was the third of five children. She transitioned to her heavenly home on Sunday, February 13, 2022. Ola was raised in a Christian... View Obituary & Service Information

The family of Ola M. Carr created this Life Tributes page to make it easy to share your memories.

Ola Mae Horton Carr was born to the late Henry Horton and Vergie...

Send flowers to the Carr family.