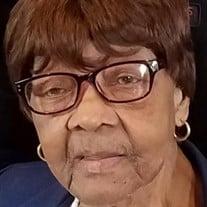 Nellie Virginia Leach was born May 9th, 1926, in Martinsvile, Virginia to Jim and Dolly Dodson. As a child she obtained her academics through Henry County School System. During Her teenage years, Nellie met and married Harry Koger. From that union came four children: Charles Lindberg, Rudolph Lee, Lille Mae, and Arthur McKinley Koger. The family remained in Virginia, and enjoyed farming activities, due to the occupation of their father being a local sharecropper and “jack of all trades” within the community. During the late 1940’s Nellie became a young widow. She and her children moved north to Wilmington, Delaware. She immediately found work as a domestic engineer. They remained in Wilmington for the next several years and later met and married Frank Leach. From this union came four children: Benjamin Franklin (Junie), James Leeautry (Pudney), Robert Lazone, and Nancy Darlene Leach. The family eventually moved further north to Chester, PA and made this their permanent home. Nellie continued working as a domestic engineer over the years, securing work with various doctors, attorneys, and councilmen. After years of serving in this capacity, she retired at the age of 75. Retired life was fruitful for Nellie, as she enjoyed the time spent with her family. She loved to cook, crochet, sing, and dance. She sacrificed her needs for the good of her family. She was a devout Jehovah’s Witness and loved going out doing “field service” also known as Pioneering. You would often see her standing “over town” Chester near the Transportation Center sharing her faith with others. Nellie will be remembered for being a very strong, loving, and courageous woman. She lived every moment by sharing her life, telling stories of her life with whoever she came into contact with. Those words of wisdom and the lessons within those stories are….priceless! During a brief hospital stay at Crozer Hospital, she quietly transitioned on November 7, 2021. She is preceded in death by her siblings, Nannie Effie Mae Jacks, James Spencer, Mildred Prunty, Robert Lee Dodson, and Joe Benny Dodson; her children Charles Koger, James Leach, Benjamin Leach, and Robert Leach. She leaves to cherish in her memory, Rudolph L. Koger, Lillie M. Graves, Arthur M. Koger, and Darlene Leach, 24 grandchildren, 23 great grandchildren, and 2 great-great grandchildren, and a host of nieces, nephews, other relatives and close friends. The Family

Nellie Virginia Leach was born May 9th, 1926, in Martinsvile, Virginia to Jim and Dolly Dodson. As a child she obtained her academics through Henry County School System. During Her teenage years, Nellie met and married Harry Koger. From that... View Obituary & Service Information

The family of Nellie V. Leach created this Life Tributes page to make it easy to share your memories.

Send flowers to the Leach family.