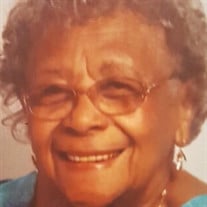 Myrtice Hastings was born June 10th, 1928 in Chester, Pennsylvania. She was called to her heavenly home on September 6th, 2019 at Crozer Chester Medical Center, after a short illness, surrounded by her loving family. Myrtice was the daughter of the late Frankie Stewart and granddaughter of the late Francis Rainey and younger sister of the late Julia Rico. Myrtice was married to the late James W. Hastings Sr., and they became parents of twelve children. Survived by James W. Hastings Jr. (Dell), Leonard Hastings (Barbara), Drena Brooks (Carl), Marlena Countee, (Joseph), Muriel Hastings, Pamela Hastings, Debra Hastings, Donna Hastings, Moreen Hastings Predeceased by Kenneth Hastings, Gail Hastings, Dale Hastings. Survived by a host of grandchildren, great-grandchildren, and nieces, nephews Saundra Smith, Joanne Harris, Jose Rico, Allen Rico (Frankie), Kathleen Rico. Myrtice was educated in the Chester Public School System. After raising her children, she fulfilled a long-time dream of obtaining her high school diploma, as well as earning her driver’s license. Myrtice went on to work as a Nursing Assistant at Crozer-Chester Medical Center until her retirement after thirty years of service. Myrtice received several awards of recognition for her diligence and the loving care of her patients. Myrtice was a welcoming light to her co-workers as well. Myrtice enjoyed socializing with her neighbors, especially when rounds of bingo were involved. She loved meals shared with her family and friends. She enjoyed traveling with her family, which included trips to casinos, movies, plays, family members' houses, and island cruises. Myrtice loved spending time with her tribe of grandchildren, who whenever possible, welcomed staying with Mommom as it also provided family time with her and their many cousins. Myrtice epitomized motherhood; consistently showing unconditional love and devotion not just for her family, but to all who reached out to her. Her family and friends are forever grateful for her loving spirit and strength of character. She helped carry many loads, for so many for so long. She was called Mom by many, not just by her family. Rest in peace, Mom. We know your soul is rejoicing in the presence of the Lord.

Myrtice Hastings was born June 10th, 1928 in Chester, Pennsylvania. She was called to her heavenly home on September 6th, 2019 at Crozer Chester Medical Center, after a short illness, surrounded by her loving family. Myrtice was the daughter... View Obituary & Service Information

The family of Myrtice Hastings created this Life Tributes page to make it easy to share your memories.

Send flowers to the Hastings family.