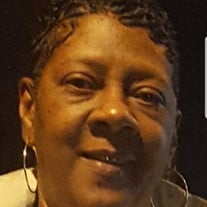 Myrna Boulware-Smith, 59, of Upper-ChiChester, was called home on Friday, October 11, 2019 at the Westgate Nursing Home and Rehabilitation Facility in Havertown, PA. She was born on July 31, 1960 in Chester, Pennsylvania, to the late Rosella Gay and Edward Gibbs. She had the pleasure of being raised by her mother’s husband, the late Thomas Gay, whom she held very dear to her heart. Myrna accepted Christ at an early age, and she was an active member of Temple Baptist Church. Until becoming too ill to do so, she enjoyed attending services there with her children. Myrna was educated in the Chester Upland School District through 1978. However, she received her GED through Penn Foster’s online program in 2006. Myrna held several jobs during her lifetime. She worked at Eckerd Drug Store Warehouse (Bristol, PA) for 10 years before working 5 years with Star Association (Ridley, PA). Following that, she enjoyed working as an independent home health aide until accepting employment with WalMart. Myrna also worked for Jevs Independent Living, where she had the opportunity to take care of her dad, Thomas Gay. Myrna had a huge heart and always went out of her way to help others. If you needed something, you could always count on “Aunt Myrna” to give up her last. She had an abundance of children that she took care of through the foster care system, and she loved them as if they were her own. She was truly a devoted foster mother. Myrna was predeceased by her son Joseph Smith, her parents Rosella and Thomas Gay, her brother Jamie Boulware, and her nephew E’Maj N. Sadler. She leaves to cherish her precious memories, her children, Nicholas Schetz, Krizm Rosario, Raya Smith, and Jaahid Smith, grandsons, Joseph Smith, Michael Fagan, Michael Perez, and Jonathan, father, Edward Gibbs, sisters, Deborah Gibbs, Wanda Gibbs, Karen (Ralph) Coates, all from Washington D.C., Mamie Denise (Herman) Outar from Clarksville Tennessee, brothers, Shawn Gibbs, John Smith, and Damon Smith of Wilmington DE., three god-daughters, Si’Onna Martin, Da’Sani Gordon, and Allure Herring, two very dear friends, Josette Richardson and Deborah Potts-Herring, and a host of aunts, uncles, nieces, nephews, cousins, and friends.

Myrna Boulware-Smith, 59, of Upper-ChiChester, was called home on Friday, October 11, 2019 at the Westgate Nursing Home and Rehabilitation Facility in Havertown, PA. She was born on July 31, 1960 in Chester, Pennsylvania, to the late Rosella... View Obituary & Service Information

The family of Myrna Boulware-Smith created this Life Tributes page to make it easy to share your memories.

Send flowers to the Boulware-Smith family.