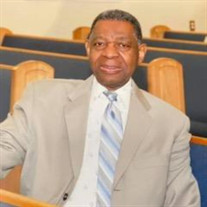 Deacon Matthew Jenkins came into the world on May 30, 1933 as the second child and eldest son of James and Carrie Frazier Jenkins in Chester, Pennsylvania. His father’s favorite stories of his youth included how James Jenkins made the trek from South Carolina to Detroit in search of post-WWI war employment and made an unscheduled stop in Chester. As it turned out, the job opportunities were so plentiful and the social scene was so grand that this brief lay-over turned into permanent residence… and the rest was history. Matthew was brought up in a Christian home and was a loyal servant of the Lord all the days of his life. His father was a prominent member of the Thomas M. Thomas Presbyterian Church, and his mother was a member of Calvary Baptist Church. Matthew followed his mother into membership of Calvary at an early age. Growing up, he attended Chester public schools and graduated from Chester High School in 1951. A few years later, Matthew went on to attend Morgan State University where he met the love of his life, a ‘real classy gal’ from Westminster, MD, named Anne. A campus courtship began. Matthew proudly served in the US military and was stationed in various posts in Europe, including Austria and East Berlin, Germany. Upon an honorable discharge, Matthew continued his courtship of Anne. They were married on May 12, 1962. From that union came their only child, Michelle. The family lived up ‘on the hill’ for several years before moving to Wilson Street. Many years later, Matt and Anne moved right over the bridge into New Jersey, still only minutes from their beloved Calvary. Throughout his working career, Mathew was a lab technician at Hannaman hospital in Philadelphia, a substitute history teacher, and for many years, an archivist for the Philadelphia Veterans Administration in Germantown. To so many, Matthew’s life was considered to be a blessing to them. Numerous stories and testaments to his faith, his love, his works, commitment, and dedication could literally fill many books. He served on the deacon board at Calvary for nearly 60 years, honored recently with Deacon Emeritus. He served twice as the deacon board chairman, and was honored many times throughout his spiritual walk. Matthew’s services as senior deacon also included coordinator of Men’s Day programs, Adult Sunday School, Senior Ministry and noted church historian, chair of an anniversary committee, pastoral search committee member, and a speaker for venerable Feeding programs. He was loved as a mentor and a friend. Matthew ‘belonged to everyone who walked with him along the way’. His life-long organization memberships reached far and wide. He had a leadership role in the Philadelphia Baptist Association, spanning over 40 years. He was a distinguished member of the YMCA Y’s Men of Chester, the Most Worshipful Prince Hall Grand Lodge Free and Accepted Masons of PA (Franklin Lodge #58), and the Philadelphia Rho Chapter of the Alpha Phi Alpha fraternity. All who knew and worked with him praised him highly as a powerful and dignified man of God. Matthew was preceded in death by his beloved wife Anne, brothers Henry and Nathaniel, sister Marie Carson, nephew Melvin Carson, and niece Denise Jenkins Epps. He is survived by his daughter Michelle Simms, nephews Charles, Kevin (Tara), and Keith, nieces Vernadine and Elaine (Dwayne), sisters-in-law Audrey and Delcenia, and grand-nieces and nephews Gerald Jr., Kareem, Justin, and Kai. Also to treasure his memory are dear cousins and family friends. Although his earthly walk has ended, his enduring legacy is the picture of a life well lived, the many people who share his heart, and the persistent and well-admired call to ‘run on, run on’.

Deacon Matthew Jenkins came into the world on May 30, 1933 as the second child and eldest son of James and Carrie Frazier Jenkins in Chester, Pennsylvania. His father&#8217;s favorite stories of his youth included how James Jenkins made the... View Obituary & Service Information

The family of Matthew J. Jenkins created this Life Tributes page to make it easy to share your memories.

Send flowers to the Jenkins family.