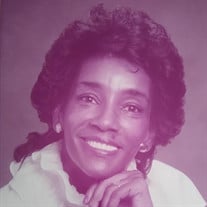 Mary Riley Gibbs was born on October 28, 1933 in Chester, PA. Her parents were the late Capes and Geneva Riley. Mary attended Chester public schools and a 1951 graduate of Chester High School. Mary was a woman of Faith. Her Spiritual life began at Calvary Baptist Church under the Pastoralship of the late Reverend Dr. Pius Barber. During that time, the late Dr. Martin Luther King taught Sunday School there for 3 years. Mary attended his classes and he addressed her as “little Mary.” Later, in the 1990’s, Mary joined the former White Rock Christian Church which she was a previous member. During her life, she enjoyed playing Pinochle, 500 Rummy, attending cocktail parties with other couples, playing the lottery, crocheting, ceramics, word search puzzles, collecting old coins, collecting beanie babies, and eating her MINTS. Mary was kind, loving, and a giving person. She would give, money, chitterlings, greens, and anything else if she knew that person was in need or wanted it. One fact to know is, Mary’s kindness was not to be taken as a weakness. She could be very “rambunctious” and “combative” when necessary. When Mary was happy, she would always do her “Shimmy Shake Dance.” In 1953, Mary married the late Joseph D. Gibbs. This union blessed 5 children: Anita, Victoria, Cynthia, Joseph Jr.,and Roslyn. Many years later, after determining to provide the best for her children as a single parent, Mary was employed at Children’s Cottage in Media, PA for 12 years. Other employments included: Wilson Nursery in Chester,PA, West Philadelphia Mental Health Consortiom, and Unit Clerk at Fair Acres Senior Home, Media, PA. Mary loved her children, grands, and great grands very much. She would always have something hilarious to say. In addition, she would keep them “STRAIGHT” and anyone else when necessary. Her children were always encouraged to lean on the Lord, learn to be independent, be successful in life and to Vote. Mary’s was affectionate and partial toward her son in laws. This was because she had so many girls and granddaughters. Kevin, who preceded her in death, lived a few blocks from Mary’s house. They would connect in trying to win the lottery. Teddy and Mary would exchange recipes from Kansas. Eddie was the first son in law. Therefore, he went through the initiation with Mary and made it easier for the other brother in laws. Mary and Eddie would have long talks and had connected with a special bond. If anyone would try to “mess” with Eddie, Mary would step in, ready to fight. On August 27, 2021, Angels opened the doors for Mary to enter. She is survived by her children Anita Gibbs Brown (Edward) Upper Chichester, PA, Victoria Gibbs Freeman (Theodore) Witchita, Kansas, Cynthia Gibbs-Ricks and Roslyn Gibbs of Chester, Joseph Gibbs (Gwen) of Wilmington, Delaware; 9 Grandchildren: Ebony, Edward Jr. (Tiffany), Theodore, Krista (Geno), Kishea, Kalisha, Tiara, Tiyanna, and Ranae. 7 Great grandchildren: Ra’kai, Emiyah, Elijah, Mikaela, Jasmine, Geno and Assad. Also to cherish her memories, she leaves a host of neices, nephews and cousins. Other close friends and family members to cherish Mary’s memories are: Lena, Emma, Pansy, Anthony, and Charlene. Some of Mary’s life historical events includes living during the great depression, bombing of Pear Harbor, Voting Rights march on Edmund Pettus Bridge, Segregation of schools, and March on Washington, just to name a few. Throughout her life, Mary continually gave thanks to God for his grace and mercies shown her down through the years. Finally, Mary is the last of the original Aunts on the Gibbs side of the family. She was truly a Pioneer. Her kindness, smile, personality, and Spirit will definitely be missed. Join Zoom Meeting https://us02web.zoom.us/j/82614669765?pwd=am94YXZlMmZoVjFTMXVTWHFBS1NGdz09

Mary Riley Gibbs was born on October 28, 1933 in Chester, PA. Her parents were the late Capes and Geneva Riley. Mary attended Chester public schools and a 1951 graduate of Chester High School. Mary was a woman of Faith. Her Spiritual life... View Obituary & Service Information

The family of Mary R. Gibbs created this Life Tributes page to make it easy to share your memories.

Send flowers to the Gibbs family.