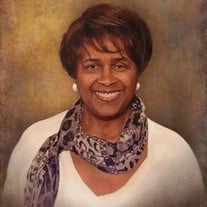 Legacy of Life Mary Elizabeth (Carter) Derrickson-Johnson was born on July 08, 1937, at Bryn Mawr Hospital, to the union of Lee Henry Carter and Lorraine Norman Carter. She was called home to be with the Lord on May 27, 2021. Mary spent her early childhood in Wayne, Pennsylvania. By the age of 10 years, Mary lost both parents and her older sister to tuberculosis. She would later lose her youngest sister to pneumonia. In an instant, her role as big sister shifted to protector and caretaker of her only surviving sibling, George, as they entered the foster care system. Though hardships were imminent, Mary took pride in the protection and care of her brother while living in several foster homes. She accepted the Lord at an early age and understood the power of prayer, a trait that her parents instilled in her. During her high school years, Mary and her brother entered the care of Christine Yates, in South Media, Pennsylvania. She was educated in Chichester and Nether Providence school districts, graduating from Nether Providence High School with an aspiration to pursue a nursing career. Her pursuit for academic success was fueled by teachers who discouraged her interest, suggesting that “she should choose a career for which she was more suited.” Mary accepted the challenge posed by her teachers. She entered a nursing program and obtained certifications as a Nurses’ Aide and a Licensed Practical Nurse (LPN). In 1956, Mary entered into marriage with Ernest Derrickson, Sr. to whom three children were born (Janet, Kimberly and Ernest, Jr.). Mary quickly learned to master the art of multi-tasking; taking care of her children and working as a private duty nurse in continuous pursuit of her academic goals. In 1976, with 3 children (11, 13 and 16 years old), Mary attained certification as a Registered Nurse (RN) from Delaware County Community College. She was one of the first African-American women to graduate from DCCC’s nursing program. She worked as a Community Nurse with Dr. Emir Rubio, MD, at the first community medical clinic located in the William Penn Project. Fondly known as “Miss Mary '' her commitment to the needs of the community, young and old, was well respected. Mary was a trailblazer and legacy builder. In 1981, with a full-time job, a home to manage, children in junior high, high school, and college, Mary graduated from Gwynedd Mercy College with a Bachelor of Science in Nursing (BSN). She counted this as a victory, graduating one month after her eldest child had obtained her undergraduate degree. Over the course of 30 plus years, Mary’s nursing career included positions at Tri-County, Sacred Heart and Haverford State Hospitals, Delaware County Community Health, Liberty Home Health, and Blue Cross/Blue Shield. Ever the embodiment of servant leadership, faith, and hope, Mary volunteered as one of the first nurses in a hospice program in Chester, PA. Throughout her tenure as a nurse, she supervised and mentored many entry level nurses, some of whom continue to acknowledge her as the impetus for their professional endeavors and passion as healthcare providers. Her commitment to nursing and her family didn’t outweigh her continued service to God. Mary was an active member of Temple Baptist Church, Chester, PA, serving on the nursing board, the senior usher board and numerous committees. In 1987, she joined White Rock Baptist Church, in Philadelphia, PA. She was assigned to the Sheepfold of Stephen/Job, and served on the Trustee Aid, Mission of Esther Circle, Christian Education Ministry, the Quilting Ministry, recording secretary for the Trustee Board, and President of the Golden Achievers. She continued her Christian walk at Shiloh Missionary Baptist Church, Anchorage, AK, where she was ordained as a Deacon, and participated in several community outreach ministries. She was a long-time member of the Southeastern National Black Nursing Association, the N.A.A.C.P. (Media Area and Anchorage Branches), and recognized as an annual contributor to Challenger’s Independent Living Program (Maryland). Mary had an affinity for cooking, baking, sewing, home maintenance, and travel. She traveled to several countries in Africa, the Holy Land, London, Paris, Mexico, and many other destinations within the United States. She always cared for those in need, making herself available to bake a cake, provide food or clothing, and at times, just stopping by to make sure friends and family were taking care of their medical needs. Mary was a devoted mother who was committed to instilling the village mentality in her children and the foundation that “All things are possible through God.” She assured that all three of her children were baptized by age 12 years and actively served on the Junior Usher Board, Youth Choir, and Youth program (Temple Baptist Church) to name a few. She took great pride in the professional success of her children and grandchildren who all have attained undergraduate and postgraduate degrees, and work within health care professions: social work, psychology, nursing, paramedic, volunteer firefighter, and respiratory therapy. During retirement, while on vacation in Anchorage, AK, she met and later married Air Force Chief Master Sergeant (retired) Tommy Johnson, in 2004. She and Tommy traveled extensively and maintained residences in Alaska and Arizona. On May 27, 2021, Mary went to her eternal home to be with the Lord. She was preceded in death by her parents, Lee Henry and Lorraine Carter, two sisters, Agnes Gilliam and Marionette Delores Carter; and two brothers, William Henry Carter and George Carter. She leaves to cherish her memory, her husband, Tommy Johnson, three children, Janet S. Riley-Ford (Frank A. Ford III), Kimberly Derrickson-Epps (John Henry Epps, Jr.), and Ernest Derrickson, Jr.; two grandchildren, Ja-Nell Leanna Riley and Carter O’Brien Ford, three step-children, a host of nieces, nephews, friends, and her church families. In lieu of flowers donations can be made to the NAACP-Media Area Branch, P.O. Box 1973, Media, Pa. 19063 in the name of Mary Derrickson-Johnson. Join Zoom Meeting https://us02web.zoom.us/j/86898677064?pwd=UUswWHAzSFNzT3RpcVA4R0FDU0NXUT09

Legacy of Life Mary Elizabeth (Carter) Derrickson-Johnson was born on July 08, 1937, at Bryn Mawr Hospital, to the union of Lee Henry Carter and Lorraine Norman Carter. She was called home to be with the Lord on May 27, 2021. Mary spent her... View Obituary & Service Information

The family of Mary E. Derrickson-Johnson created this Life Tributes page to make it easy to share your memories.