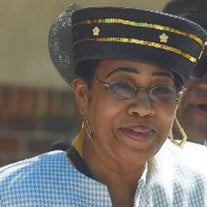 Celebrating the Journey of Martrichia Tucker Matthews Martrichia Tucker Matthews was affectionately known as “Tresa” was born to the late Morris C. Tucker and the late Louis Ethel Johnson-Tucker on March 31, 1949 at Chester Hospital in Chester, Pennsylvania. She quietly left this earth on January 18, 2020 at the Wallingford Nursing Home in Wallingford, Pennsylvania. Tresa was a life-long resident of Chester, Pennsylvania and attended Chester-Upland School District Public Schools. She received her GED in 1984. Tresa worked for thirteen years as a Counselor at the Sleighton School in Glen Mills, Pennsylvania. She enjoyed counseling the male juveniles that were court appointed there. She worked there until the facility closed in 2001. She was employed at Lima Estates as a Dietary Aide in which she retired from. In addition to other jobs in her lifetime that she enjoyed doing, she was a homemaker to her husband and daughter, babysitter for her grandchildren and great grandchildren and to other family members including volunteering her precious time to care for Foster Children. She also enjoyed celebrating birthdays with her family by baking cakes for them. She enjoyed cooking and hosting parties and holiday events, planting flowers and plants in her yard, “interior decorating”, drawing and dancing. Tresa was a faithful member of Greater Hope Christian Fellowship Church in Wilmington, Delaware where she served as a Deaconess and Nurse. Tresa always loved studying the word of God and teaching The Word to her daughter and grandchildren and great grandchildren. Tresa leaves behind her beloved faithful husband of fifty-two years Harrison U. Matthews of Chester, Pennsylvania; daughter Christine W. Matthews-Celious (Tony) of Chester, Pennsylvania; a stepson Kevin A. Strickland (Katy) of Upland, Pennsylvania four grandchildren: Andrea, Unique, Bruce and Micah; two great-grandchildren David and Jalayah and seven step grandchildren. Tresa also leaves behind her brothers: Morris Tucker, Jr., Edward Tucker, Alonzo Tucker (Thelma) and Orlando Tucker of Chester, Pennsylvania, Robert K. Tucker (Terry) of Wilmington, Delaware, Larry Tucker (Doreen) of Bristol, Pennsylvania, Gregory Tucker (Iris), Shawn Tucker and Jerry Tucker of Philadelphia, Pennsylvania, along with the late Anthony M. Tucker; sisters Pamela Tucker of Bear, Delaware and Sharon D. Parks (Walter) of Harrisburg, Pennsylvania; sister-in-law Patricia Matthews of Chester, Pennsylvania; brother-in-law Charles Alston of Brookhaven, Pennsylvania; along with the late sisters-in-laws Shirley Matthew-Alston and Barbara Jean Burton-Tucker. Tresa lived her life to the fullest with no regrets. Her angelic beauty matched her graceful love of family and her friends. We will remember her for the phenomenal woman that she was!

The family of Martrichia Matthews created this Life Tributes page to make it easy to share your memories.

Send flowers to the Matthews family.