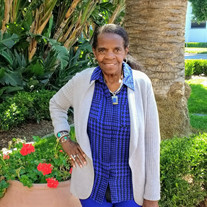 MARGUERITE JEAN TAYLOR was born to the late Alma Taylor on May 30, 1939 in Philadelphia, Pennsylvania. After living with her mother for a few years, she was sent to live with the late Mamie and Joseph Dickerson in Morton, Pennsylvania where she was raised to adulthood. She received elementary education in Morton, Pennsylvania; graduated from Ridley Township High School in Ridley Township, Pennsylvania; and furthered her education receiving a degree in Early Childhood Education from Harcum College in Bryn Mawr, Pennsylvania. Marguerite began her career teaching at Robert Wade Daycare Center in Chester, Pennsylvania; later teaching at Penn Street Daycare in Chester, Pennsylvania; and retiring as a Case Worker at Children and Youth Center in Upper Darby, Pennsylvania. Marguerite met her husband through a lifelong friend, (Sandy Thompson). They married in 1958, had a wonderful long lasting marriage of 60 years and were blessed with three children. They settled in Chester, Pennsylvania on Kerlin Street where they remained until her demise. Shortly after her marriage she became a member of Calvary Baptist Church in Chester, was an active, valued, and committed member, she also sang with the Wilmington-Chester Choir and the Women in White. After her retirement in 2005, she remained in contact with many of her former co-workers and would rotate hosting regular luncheons and get-togethers. She was a kind, even-tempered person and always youthful looking. Parents of former daycare children who saw her would remember her fondly and comment on how little she had changed. As a complication of an illness, she was on dialysis for several years, eventually being blessed with a successful kidney transplant in 2004. She didn’t shrink from challenges, but maintained a positive outlook on life and would rarely complain. Despite her prolonged illness, she never lost hope and continued to work and live a full life traveling, singing and mostly doting on her grandchildren and great-grandchildren who called her Iye Iye. She had a deep love for her family, an unwavering will to persevere, took much pride in her appearance and ability to be independent, and always verbalized eternal gratitude and tactful honesty, Iye Iye was beyond wonderful in SO many ways. Marguerite found great enjoyment in the simple things; walks along The Atlantic City Boardwalk, sitting on the beach, cooking for the family (she made the best potato salad). She loved flying and shopping, and was known to once have spent all day at Value City from opening to closing. Very health conscious until the end, took swimming lessons in her 60’s and exercised daily. Marguerite Jean departed this life at 12:45 AM Sunday, September 22, 2019 at Prince George’s Hospital Center in Cheverly, Maryland with family at her side. Marguerite was preceded in death by Clyde Potts, her stepson. She leaves to mourn her passing: beloved husband Clyde Taylor; daughter - Robin Jones; sons – Dwayne Taylor and Darryl Taylor; daughter-in-law – Cynthia Taylor; and sister Louise Devlin. Many grandchildren: Chaunte Baxter (Robert); Edward Jones, Jr. (Cynthia Pedone); Halle Jones (Deron Penn); Ashley Wilson; Clyde Potts, Jr. and Nishera Potts; great grandchildren: LaNya Baxter; Asiyah Duah; Mia Baxter; Ryan Baxter; Enzo Pedone; Sylas Potts and Greyson Penn; many cousins, her church family and a multitude of friends.

MARGUERITE JEAN TAYLOR was born to the late Alma Taylor on May 30, 1939 in Philadelphia, Pennsylvania. After living with her mother for a few years, she was sent to live with the late Mamie and Joseph Dickerson in Morton, Pennsylvania where... View Obituary & Service Information

The family of Marguerite J. Taylor created this Life Tributes page to make it easy to share your memories.

MARGUERITE JEAN TAYLOR was born to the late Alma Taylor on May...

Send flowers to the Taylor family.