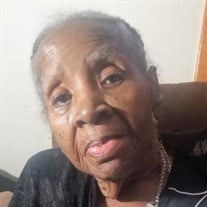 Mabel Roberts Watts was born January 26, 1931 in Downingtown Pennsylvania to the late Rachel Wilson and Horace Wilson, Sr. who lived in Downingtown, Pa. Mabel’s mother was hit by car and killed coming from Church when Mabel was 8 months old. Mable was in foster home care until her Uncle George and Aunt Charlotte Eve found her when she was about 13 years old, raising her in Chester Heights Pa. On April 25, 2020 our beloved Mabel Watts known as "Mom Mabel" went peacefully and surrounded by family at home to be with our Lord and Savior Jesus Christ. She was 89 years old. Mabel graduated from Media High School then went to school for nursing. Mabel was a nurse for over 40 years before getting hurt. Mabel loved to cook and feed people. Mabel was affectionately called “Mom Mabel”. Mom Mabel was the family daycare and took care of all her grandchildren and multiple other family’s children until her health failed. Mabel married in her early years and became Mabel Roberts. Later in life she met Lewis Watts Sr. who she married. Lewis and Mabel would cook big dinners and feed the whole neighborhood. Anyone was welcome to come eat. He was the BQ King and she was the baking Queen. Mabel had two brothers who preceded her in death, Horace Wilson (Bernice) of Downtown Pa. Bubba Minor of Philadelphia Pa. Mabel is survived by a Cousin who was like a sister, Sheila Harding of Coatesville Pa. She is survived by one Sister-in-law, Mammie Majors of Englewood, NJ. Mabel was preceded in death by her husband Lewis Watts Sr. and survived by Son David R. Watts (Tara) of Chester Pa. daughter Lenore Johnson (Tony) of Chester Pa. son Dennis Williams, (Theresa) of Newark De. son Lewis Watts Jr. of Chester Pa daughter Margaret Johnson (Donald) of Salem NJ. Godsons Julius Davis preceded in death of Chester Pa. and James Singleton of Chester Pa. 17 Grandchildren, DaVante L. Watts, Karima J. Watts, Amber L. Watts, Rome Pinder, Dennis Williams Jr., Deneia Williams, Michael Williams, April Harris, Antoinette Johnson, Lenore Johnson Jr., Denise White, Lisa Johnson, Lewis Watts 3rd, Kirim Watts, Ricky Watts, Sojoura Watts, Lyneisha Watts. There are many relatives and friends who loved Mabel very much but are too numerous to name individually. 26 Great-grandchildren, including Kadir J. Handy, who preceded her in death. Mabel was enrolled in a great Adult Day Care Program the last two years, called Mercy life in Sharon Hill, PA that we highly recommend. We truly thank all the staff and transportation for everything. I believe the program added quality of life to her. I want to thank Bishop Richard B Knox, First lady/Pastor Knox and Abundant Grace & Mercy Deliverance Ministries for everything. I want to thank all my children for helping me take care of Mom Mabel. I have to let the world know I truly thank my wife Tara and daughter Karima for unselfishly helping me take care of mom. God is going to bless you for your sacrifices. Because of Pennsylvania restrictions. Tuesday 5/5/2020 Viewing 10am-11am and funeral is private. No repast. Memorial will be set for a later date. Thank you for understanding. David R. Watts

Mabel Roberts Watts was born January 26, 1931 in Downingtown Pennsylvania to the late Rachel Wilson and Horace Wilson, Sr. who lived in Downingtown, Pa. Mabel&#8217;s mother was hit by car and killed coming from Church when Mabel was 8 months... View Obituary & Service Information

The family of Mabel Watts created this Life Tributes page to make it easy to share your memories.

Send flowers to the Watts family.