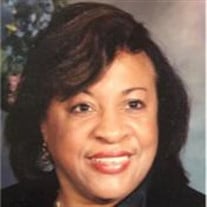 Lucy Anne Dunn-Jones, transitioned from this life on June 12, 2020. Lucy was the daughter of the late Esther and Preston Dunn, Sr. and the wife of the late William J. Jones. Lucy resided in Chichester, PA. Lucy was born on July 16, 1939 and was raised by her father‘s sister Bessie Dunn-Raglund in the city of Chester. She attended the Chester School District and graduated from Chester High School in 1958. Lucy was a member of the Fifth Presbyterian Church, Chester, Pennsylvania where she was also united in matrimony to William J. Jones in a double ring ceremony. Lucy was a worker and held various jobs. She worked for Greater Chester Movement in Chester, Pennsylvania, Wanamakers in Springfield, as a Counselor at Women Against Rape in Media, Pennsylvania and in 1998 she was employed by the Salvation Army Chester, Pennsylvania. In 2003 Lucy made the decision to attend college at the Springfield Campus in Wilmington, Delaware receiving a degree in Human Services in 2009. While working at the Salvation Army, Lucy’s job function was a case manager working with the homeless population. Lucy was a former member of the First Baptist Church of Fairview where she sang with the Ford Ensemble. After leaving First Baptist Lucy became one of the founding members of Freedom Baptist Church in Chester, Pennsylvania along with her husband William J. Jones where she served as Deaconess and received honors in Christian Education. Lucy also attended and joined the Mount Pleasant Baptist Church, Twin Oaks, Pennsylvania for awhile and served on the Deaconess board and sang with the Praise Team. Lucy loved singing and was a member of the Ford Ensemble, at Mount Pleasant Baptist Church she sang on the Praise Team and she was also a member of the Ambassadors for Christ who traveled from Church to Church singing God‘s praises. Her favorite song was Uncloudy Day. After a long separation, in February 2020, Lucy rejoined Mount Pleasant Baptist Church under the Pastorate of Rev. Dr. Willie E. Robinson. She was so thrilled and overjoyed. She said she felt like she was home. She was anxious for the Pandemic to be over so that she could go back to Church. Lucy loved to cook and could cook! Two of her specialties were her famous sweet potato pudding and baked ham. Whenever there were family functions/reunions and food was required Lucy was nominated to bring the sweet potatoes and/or the ham. Lucy was a very giving person. If you needed anything, all you had to do to was ask and she was willing to help in any way she could. Although Lucy and Bill did not have children of their own, they raised and nurtured many children in the family and abroad. Some of those children are Preston Dunn III, Jerome and Donna Cooper, Michele Freeman and Sachettco, from Japan. They also had two god children Kelli Thompson and Gwendolyn (Nicky) Atkinson. Lucy was preceded in death by her husband William J. Jones; her mother Esther Dunn; her father Preston Dunn, Sr.; her sister Priscilla Johnson; half sister Aregenelle Hurt and her nephew Darnell Johnson and a dear companion Harry Dorsey. Lucy leaves to cherish her memories: two brothers, Preston Dunn, Sr. (Catherine) of Louisiana, and Elder John Towns of Chester, a dear niece Kimberly Riley of Bear Delaware, a nephew Preston Dunn, III of Pittsburgh, PA, a dear cousin Laura Robinson of Chester and a host of loving nieces, nephews, cousins and life-long friends. Lovingly Submitted, The Family

Lucy Anne Dunn-Jones, transitioned from this life on June 12, 2020. Lucy was the daughter of the late Esther and Preston Dunn, Sr. and the wife of the late William J. Jones. Lucy resided in Chichester, PA. Lucy was born on July 16, 1939... View Obituary & Service Information

The family of Lucy Anne Jones created this Life Tributes page to make it easy to share your memories.

Lucy Anne Dunn-Jones, transitioned from this life on June 12,...

Send flowers to the Jones family.