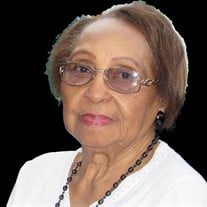 LOUISE VIRGINIA (Towns) MCKENZIE, affectionately known as “Nana”, was born on October 18, 1923 peacefully departed this life on Monday, May 24, 2021 in the comfort of her home. She was the eldest of four children born to the late Luebinda Frances and Percy Towns. She was united in holy matrimony to the late Edward Lee McKenzie in 1940 and from this union, they were blessed with two lovely children, Carl and Belinda – the joys of her life! Louise received her formal education in the Public Schools of Chester. She worked for various employers over the years including Sackville Mills, Greater Chester Movement, and Dr. McCormick. Louise joined Calvary Baptist Church in Chester, PA under the pastorate of the late Rev. J. Pius Barbour and remained a long-time member until her departure from this earth. She was active in various church committees, such as the Altar Guild, Pearl B. Dillard Nurses Unit, Pastors Aide, Rosella Woods Missionary Society, and Scholarship Committee. Louise enjoyed gourmet cooking, which kept her friends and family excited about what she would be preparing next. She loved shopping with her daughter, and traveling to different countries when she was able. Louise exemplified grace and had impeccable style. She wouldn’t allow Belinda to shop for her as she was just that meticulous in knowing exactly what she wanted. She always made certain her hair was kept stylish and she demanded to do her own manicure because she knew exactly how she wanted them to look. Her favorite song was “Well Done”, by Deitrick Haddon, and her favorite scripture was John 14:1-4. She is preceded in death by her brothers Charles “Chicken Charlie” and Jessie Towns, sister Bernice E. Custis, and her fur babies “Tyler-Boy” and “McKenzie”. Louise leaves to cherish her memory: son, Carl W. McKenzie; daughter, Belinda M. Baker; grandchildren Carl W. McKenzie Jr. (Jada), Tia McKenzie-Joseph (Charles), Dar’Nelle McKenzie, Jamir McKenzie; 12 great-grandchildren; 4 great-great grandchildren; and a host of nieces, nephews, other family and friends. It will be difficult to imagine our family without her. However, we realize that God blessed us with her presence for 97 years and it was time for her to return to Him. He is the Author and Finisher of our life’s story. Lovingly and Sorrowfully Submitted, The Family

LOUISE VIRGINIA (Towns) MCKENZIE, affectionately known as &#8220;Nana&#8221;, was born on October 18, 1923 peacefully departed this life on Monday, May 24, 2021 in the comfort of her home. She was the eldest of four children born to the late... View Obituary & Service Information

The family of Louise McKenzie created this Life Tributes page to make it easy to share your memories.

Send flowers to the McKenzie family.