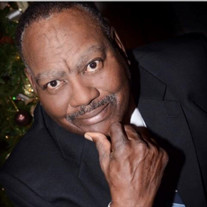 Leroy E. Carter Jr., the third child of the late Leroy E. Carter Sr. and Dorothy Mae Riddick Carter was born in Chester, PA on June 20, 1948. He departed this earthly life at 3:16 p.m. on April 12, 2021, with his loving family at his bedside. Leroy... View Obituary & Service Information

The family of Leroy E. Carter Jr. created this Life Tributes page to make it easy to share your memories.

Send flowers to the Carter family.