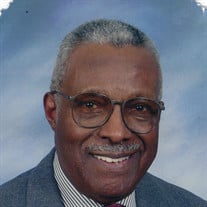 Leon Frisby (Babe, Daddy Babe, Uncle Babe, as he was affectionately known) transitioned peacefully from earth to Glory November 16, 2021 at the age of 98. Son of the late William and Bertha Frisby, he was preceded in death by siblings, Margaret, Leroy, and William (“Junior”). Leon was educated in the Philadelphia public schools, graduated from South Philadelphia’s Boys High in June 1944, and was employed at Sun Shipbuilding of Chester, PA. Growing up, Leon was always an honor student - conscientious, energetic and very dependable. His mother made her children attend Sunday School; giving each one 2 cents: one for Sunday School, and one to buy candy. He had a job and would provide groceries for the family at 8 yrs. of age. In 1947, he graduated from Cheyney State Teacher’s College with both Bachelor’s and Master’s degrees in education. While at Cheyney Leon met Mabel Phillips and they were married on April 4, 1952. They had two sons, Craig Leon Frisby and Brian Scott Frisby. He relocated to Frederick, MD, and landed a position teaching industrial arts and drafting. He worked hard choosing to send a portion of his earnings to his mother, while retaining the bare minimum to live on. Leon joined St. Daniels UMC and rose to lead the Methodist Men and the Pastor/Parish Committee under the pastorate of Rev. F.D. Jones. It was during this time that Leon gave his life to Jesus Christ. The Frisby Family moved to Media, PA, in 1965, where Leon taught woodworking at Indian Lane Junior High School. In faithful obedience, Leon responded to God’s call after Rev. Carroll Boswell’s stern rebuke to, “stop bootlegging the gospel”. After graduating from Wesley Theological Seminary in Washington DC in 1977, Rev. Leon Frisby was ordained and appointed pastor of Bethsaida UMC. His tenure at Bethsaida began with several challenges including limited funds and a leaking roof, but Rev. Frisby met those challenges “head on” and, under his leadership, membership increased, and the church met all financial obligations. Later, Bethsaida merged with St. Barnabas UMC to become St. Barnabas Bethsaida UMC. Being Spirit-led, the new church became a full tithing congregation; sponsoring two overseas missionaries and installing a full-size baptismal pool. In addition, under Rev. Frisby’s spiritual leadership, five “spiritual sons” were birthed into the pastoral ministry – Cleveland Luckers, Edward Youngblood, Hartzel ‘Skip’ Pollitt, Wymon Simmons, and Allen Jenkins. Rev. Frisby returned to St. Daniels after retirement to faithfully serve as Minister of Visitation under the pastorate of Rev. Herbert W. Coe. Leon and Mabel moved to Simpson House, Philadelphia in 2002; where his beloved wife Mabel departed this life on Valentine’s Day, Feb. 14, 2003. Leon married Evelyn Prattis in August, 2004; they were married for 17 years. They worshiped at St. Daniels and even in his twilight years Rev. Frisby continued his letter writing ministry to friends, family, and congregants. Through this ministry he thanked all for caring for him and his ailing spouse(s). Many will remember how he acknowledged all acts of kindness, many accompanied with financial gifts, and that booming voice as he quoted favored lines of poetry, or his favorite table blessing, “Bless these hands upon these dishes; as Jesus blessed the loaves and fishes. As the sugar hides itself in tea – O LORD, hide thyself in me.” Leon departed this life on November 16, 2021, after living 98 God filled, blessed years. He leaves to cherish his memory his wife, Evelyn, of Chester, PA; sons, Dr. Craig Frisby of Norman, Oklahoma and Brian Frisby of New Cumberland, PA.; grand-children Angela and Marcus Frisby, and great-grandchildren Jaxon Frisby and Vanessa Hurd. He will also be missed by special daughters: the late Joann Yates Henderson of Wilmington, DE, and Frances Whittington, of Chester, PA , as well as numerous members of his St. Daniel’s UM Church Family, his beloved blended family and a host of other nieces, nephews, cousins, and friends worldwide. Sorrowfully but lovingly submitted, The Family.

Leon Frisby (Babe, Daddy Babe, Uncle Babe, as he was affectionately known) transitioned peacefully from earth to Glory November 16, 2021 at the age of 98. Son of the late William and Bertha Frisby, he was preceded in death by siblings, Margaret,... View Obituary & Service Information

The family of Rev. Leon Frisby created this Life Tributes page to make it easy to share your memories.

Send flowers to the Frisby family.