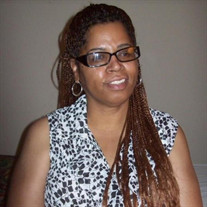 Karen P. Hales-Carney, age 63, of Crum Lynne, PA received her wings on January 25, 2021 at Penn Presbyterian Medical Center, surrounded by family. She was born on December 25, 1957 in Chester, PA to the late William P. Hales and the late Ida B. Hales. Karen attended Chester Upland School District and graduated Class of 1976. She went on to attend Cheyney University and worked many jobs, with the most notable being Tollen Law Offices, First Fidelity Bank, and Harrah’s Casino. She was strong and self-sufficient in addition to being a loyal friend. Karen loved her first three dogs, which she coincidentally named each one Queenie. She found joy in reading and discussing books as well as cooking. It was important to her to support up-and-coming entrepreneurs. Karen particularly took pride in providing care for her mother for many years. Additionally, she described herself as funny, outgoing, friendly, outspoken, and fun loving. Retelling stories was one of Karen’s fortes. She was an expert at relaying funny stories from her daily adventures with such detail. She would not only act it out from beginning to end, but she would also use different voices for each person. Karen was a bit reluctant to begin school. Her mother and little sister walked her to school on her first day of first grade. Once realizing she had to stay there without her family, she dropped to the floor while kicking and screaming, but eventually she calmed down and welcomed her newfound friends… or so we thought. The very next day, she planted herself on the sidewalk, determined that she was not going to school. Her mom had to stomp her feet and shout, “Go to school!” just to make Karen take a few steps at a time, until she made it to the front door where she would pause to give one last look of defeat. This routine continued every day for several weeks. Later on, in upper elementary school, students were often discipline by having to write. Karen typically had to write, “I will not talk in class” and “I must not chew gum in school” anywhere from 25 to 500 times. To get through this task she always recruited her little sister to write half. Ultimately, Karen grew to enjoy school, participating in Pep Squad, Softball, Field Hockey, and Key Club which allowed her to build many valuable, life-long friendships. Karen found fulfillment being a part of the Class of ‘76. With her cousin Lynn, she was sure to attend every class reunion and the many other class-related events held over the years. With religion always being a part of her life, whenever Karen encountered challenging obstacles, she said that she would just put it in God’s hands. Karen was surely one to speak her mind, clearly letting you know what she liked and disliked. She lived life her way, unapologetically. Upon reflecting on her mother, Naeemah thought, “Mom, I know your heart will get you into Heaven, but I hope your mouth won’t get you put out”. Karen leaves to cherish her memories: Daughter, Naeemah D. Michael-Ishmail; Son-In-Law, Elijah Ishmail; Son, Eric D. Michael; Daughter-in-Law, Marquita Willis; Brother, Michael Hales (Natte); Sister, Cleo Hales-Rothwell (David); Grandchildren: Nishan (Puddin’) Dale, Eshaad Michael, Jalee Michael, Tajh Michael, Kaden Willis; Special Friend, Keith Walker. She also leaves a host of other family members and friends to cherish her memories. Join Zoom Meeting https://us02web.zoom.us/j/86369681384?pwd=Um02RVJyZXB1dHVtL0VKcjZWcFFHZz09

Karen P. Hales-Carney, age 63, of Crum Lynne, PA received her wings on January 25, 2021 at Penn Presbyterian Medical Center, surrounded by family. She was born on December 25, 1957 in Chester, PA to the late William P. Hales and the late Ida... View Obituary & Service Information

The family of Karen P. Carney created this Life Tributes page to make it easy to share your memories.

Send flowers to the Carney family.