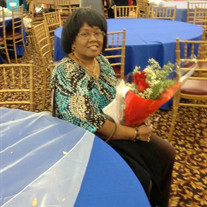 Jullande Graham Branch, age 71, departed this life on July 11, 2020. She was raised in Sharon Hill, PA and resided there until her passing. Jullande was a graduate of Darby Township High School, Class of 1967. She attended Northeastern Christian Junior College and Temple University. Jullande began her career in the Casualty Insurance Industry at Commercial Union and later worked for over 40 years for such insurance companies as The Home Insurance, Wausau Insurance Company, ACE and AIG as an Assistant Unit Supervisor, Underwriting Assistant and an Account Manager. Jullande was a member of First African Baptist Church under the leadership of Rev. Dr. Richard A Dent. She was baptized at an early age at First African by Rev. Booker W. Watkins. She served her church and GOD faithfully. Jullande was a Junior Usher and later a Senior Usher, attended BTU (Baptist Training Union), was a member of the Flower Club of Tomorrow (a youth branch of the Flower Guild), served as Secretary for 27 years of the Flower Guild and was the Secretary of the Rising Star Ministry. Jullande studied piano for years under the instruction of Elaine Sadler and performed in recitals and played piano for the church choir in her youth. Jullande was married for 40 years to the late Bernard Branch, Jr. and from that union, one daughter, Leatrice, was born. After her husband, Bernard received a heart transplant in 2002, she volunteered alongside of him for the Gift of Life Organ Donor Program informing others about organ donation. She loved music, fashion, jewelry and enjoyed watching basketball and she and her husband’s favorite football team. She was a devoted wife, mother and beloved sister. She leaves to cherish her memory her daughter, Leatrice, her sister, Mary Katrina Graham-Barr, as well as a host of family and friends. Private viewing and burial service with family and friends was held on July 24, 2020.

Jullande Graham Branch, age 71, departed this life on July 11, 2020. She was raised in Sharon Hill, PA and resided there until her passing. Jullande was a graduate of Darby Township High School, Class of 1967. She attended Northeastern... View Obituary & Service Information

The family of Jullande Graham Branch created this Life Tributes page to make it easy to share your memories.

Send flowers to the Branch family.