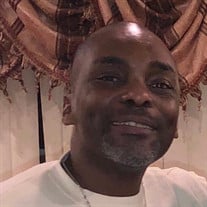 Joseph “Duke” Cook Ball was born on August 12, 1969 in Philadelphia, Pennsylvania to Beverly Cook and the late Curtis Ball. Joe/Duke, as he was affectionately called by family and friends, departed this life on May 19, 2019. Joe is predeceased by his paternal grandparents Curly and Jane Ball, his aunt Marianna “Ricky” Adams and his cousin Dana Adams. Joe grew up in Darby and Philadelphia and was educated in the William Penn and Philadelphia Public School Districts. At an early age, Joe worked as an apprentice for his father learning the carpentry trade which enabled him to make a living in the carpentry field. Through apprenticing with his father,Joe developed a lifelong affinity for carpentry and was excellent at it. He enjoyed the hobby of cutting hair and loved the holidays and sharing laughs and memories with family and friends. He was well liked by anyone who came in contact with him and was known for his “swag”, his smile, his eyebrows defined fleek and his infectious laugh. His children were the love of his life. He taught his daughter Dione, his driving techniques and was a “sideline coach” at her basketball games. Joe leaves to cherish his memory his daughters Dione Ball and Christel Otten, his son Demitre Morris, one grandson Tasil Simmons, one granddaughter “on the way”, Ma’hara Walker, birth mother Beverly Cook, stepmother Juanita Ball, who lovingly raised him. Brother Curtis Ball (Jackie), five sisters, Leslie Harold (Keenan), Patricia “Patty” Cook (Jeff), Marlita Lee (Jeff), Sonnia Mahan (Joseph), and Channel Bradley. A special friend Prudence Budd and a host of aunts, uncles, nieces, nephews, cousins and friends. Lovingly Submitted, The Family

Joseph &#8220;Duke&#8221; Cook Ball was born on August 12, 1969 in Philadelphia, Pennsylvania to Beverly Cook and the late Curtis Ball. Joe/Duke, as he was affectionately called by family and friends, departed this life on May 19, 2019. Joe... View Obituary & Service Information

The family of Joseph A. Ball "DUKE" created this Life Tributes page to make it easy to share your memories.

Send flowers to the Ball family.