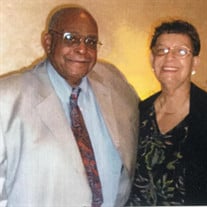 Joel K. Single Sr., 86 of Aston, PA passed into peace on 5/6/20 at Taylor Hospital from complications due to covid -19 pneumonia. Born on December, 13th, 1934 to Otis L. and Mary E. Single, he was one of five children. He was educated in the Morton school district until he was recruited by Ridley high school to play football and run track. After high school, he received an athletic scholarship to Swarthmore College. He completed a major in business and a minor in real estate. He later met Joan M. Crabb and they were married. From this blissful union came one son, Joel K .Single Jr., and love continued for over 60 years. Joel unfortunately suffered a devastating back injury which compromised his football dreams. He went on to work for Strauss-Greenberg Law Firm in Philadelphia, PA for some years, and then for Air Products as a lab chemist. Upon retirement, he worked for Bowman Construction as an Operations Manager. In the 60’s Joel was a founding member of the Y’s Men Association of Chester. They built, founded, and ran one of the first black YMCA’s in America. (West Branch YMCA, Chester, PA). He was a founding member of The Chichester Baseball League. He was also President of the Chichester Band Association. He continued to hold many offices for the YMCA until his demise. Joel loved to laugh and tease with you, he loved spending time with his grandson. He was a loving , hard -working, dedicated, and loyal; husband, father, father- in- law, grandfather, brother, uncle, and cousin. He was admired and respected by all he encountered. He was preceded in death by his parents (Otis & Mary Single), siblings ( Warren Single, James Otis Single, and Alice Cook). He leaves to mourn his passing, his son (Joel K. Single Jr.), fiance( Maiya F. Townsend), grandson ( Mason J. Single), and grand-dog ( Sir Kenji Single) of Philadelphia , PA. His sibling ( Francean Single) of Prospect Park, PA, god-daughters ( Renee Cook & Laura Jay) of Morton, PA. A host of nieces and nephews, great- nieces & great- nephews, cousins, and a multitude of relatives and friends. He will be greatly missed.

The family of Joel K. Single Sr. created this Life Tributes page to make it easy to share your memories.

Send flowers to the Single family.