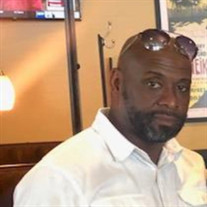 Jerrod Gibbs, affectionately known as “Rod”, “Roddy G” or Rauf” was born on May 20, 1971 in Chester, Pennsylvania to the late William E. Gibbs and Juanita P. Gibbs. He was the youngest of their five children. In his youth, Jerrod was a dominant player of basketball playing for Chester Biddy League and AAU, his most memorable game being played in Puerto Rico. Jerrod was proud to be from the “Eastside,” always sharing stories about his breakdancing and deejay skills. Jerrod was a 1992 graduate of Chester High School. He would later become a member of Laborer’s Local 413 in Chester, Pa where he was a dedicated employee. In an effort to make him more marketable in the work industry, Jerrod enrolled in CHI Technical Institute and earned his certification as a HVAC Technician. His dedication and determination was the blueprint of his household and built the structure for a well-rounded productive family. On October 2, 1999, he was united in holy matrimony to Mica Danine Ross. Together they raised three beautiful children, Troy (Desjenee’), Javai and Maya. Jerrod was a loving and devoted father. He always wanted the best for his wife and children. He instilled values in his family which have molded them into the individuals they are today. He was a dedicated family man who instilled the values of education, self-respect and respect for others. Family was important to Jerrod and the household motto will continue to ring in our ears. Jerrod enjoyed music, watching movies and making those around him laugh. His infectious smile, comical acts and words would lighten any situation. He worked tirelessly and partnered with his wife, to overcome daily obstacles of life. Jerrod enjoyed the simple things in life which made family cookouts and dinners memorable at our house. He was baptized at St. Paul CME Church and was an active member later joining Jesus Power and Love Ministries. His love for God was unwavered and did not go unnoticed. Jerrod was predeceased by his parents, William E and Juanita P. Gibbs, his sisters Resa Ann Gibbs, Kim B. Gibbs and his brother Edward Gibbs. He leaves to cherish his memory his wife of 21 years, Mica, his children Troy, Javai and Maya, his brother William (Maxine) aunts Lydia Johnson and Barbara Williams (Brown), one uncle Hugh Buchanan,mother-in-law Durel Freeman, father-in-law Michael Ross, godchildren Darneisha Williams, Aniyah Alexander, Bruce and B’Ahmad Miller, Rahmiah Rawls, God sister, Robin Taylor and a host of loving nieces, nephews, cousins and friends.

The family of Jerrod GIBBS created this Life Tributes page to make it easy to share your memories.

Send flowers to the GIBBS family.