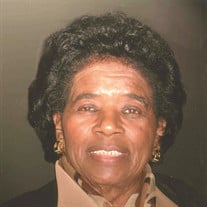 Jeanette W. Layton was born on March 27, 1935. She was the second of ten children to the late McKinley and Georgia Lee Lovett in Millen, Georgia. Jeanette grew up and was educated in Millen, Georgia. She was united in wedlock to the late James E. Williams on December 7, 1951 and from that union, their only child, Janice Lynn was born. Several years after they were married, the couple moved to Chester, PA. Jeanette held a few jobs before she started working at Fair Acres Geriatric Center, Lima, PA, as a Certified Nursing Assistant, in September of 1966, where she worked for 29 years, retiring in September of 1995. Jeanette loved her patients, they gave her joy and she enjoyed bringing them jewelry and dress clothes or anything to brighten up their days. In the early 70’s, Jeanette took over ownership of, “J’s Cleaners and Varity Store”, on 3rd Street of Chester, PA. where she was known as, “Miss Jeanette”. She was one of Chester’s earlier black female entrepreneurs. Miss Jeanette had a reputation of kindness, generosity and fairness. While owning the store she gave many students and young adults their first working experience. She showed them trust and expected them to show responsibility. She was a stickler for imparting good and lasting work ethics on those who passed through her hands. Due to health reasons, she closed the store in the mid 80’s. In the 60’s and the early 70’s Jenette attended Immaculate Heart of Mary Church and then became a member of Shiloh Baptist Church. She later moved her membership to First Faith Missionary Baptist Church under the leadership of Pastor M.R McKnight. She was a Trustee at First Faith serving as the Financial Secretary for several years. She was also a member of the Senior Choir, Pastor’s Aide, and the President of the Kitchen Committee where she was well known for her cooking and hospitality. In December of 1987 she married the late Albert Layton. After Jeanette retired from Fair Acres, she worked diligently to keep up with the repairs, cleaning, and beautification of the church. You could find her car parked in front of the church just about everyday and if you had the heart to come in, she would gladly put you to work, with no apology. She was preceded in death by her parents McKinley and Georgia Lee Lovett, siblings Johnson Lovett, Isaac Lovett, Clinton Lovett, and McKinley Lovett. Jeanette leaves to cherish her loving memory, her devoted daughter Janice Britton and son-In-law Jeffrey Britton, grandson Jeffrey M. Britton, granddaughters, Kasey Britton and Alexis Moore; 5 great grandchildren, Da’Zye, Aaliyah, Mia, Michael, Malcolm and Emoni and 5 siblings, Susanna Pryor (Gilbert), Gladys Oliver (Odell), Brenda Davis (Ron), Wilma Teen Walker (Charlie), Ella Brinson (Willie) and God Daughter Cynthia McNeil; many nieces and nephews that she loved and a host of relatives and friends who she held so very dear.

The family of Jeanette W. Layton created this Life Tributes page to make it easy to share your memories.

Send flowers to the Layton family.