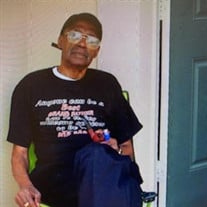 James Williams Jr. was born on June 18, 1936 to the late Maggie and James Williams Sr. in Daytona Beach, Florida. He was born in the “Negro Wing” of Halifax Hospital. His introduction into the world was not without trials and tribulations. He was born premature and under 3 lbs and was given one week to live. His mother was told that there were no ventilators for colored babies and that the family should just allow him to be disposed of by the hospital. But his mother who had lost 4 other children in the last 4 years due to lack of proper care in the Negro Wing of Halifax Hospital (or as the black residents called it Hell-Fax) made a decision that if her only son at the time was to survive she would have to make it, so against the advice of the medical staff and armed with a copy of Grays Anatomy and practical nurse assistant study and her abiding faith she took her baby home. Well, that week turned into almost 84 years. James was called home on May 21, 2020 in Chester Pennsylvania. James, affectionately known as Jay, JW, Mr. Jay and Poppy came to Chester at an early age. And that’s when he accepted Christ. He was educated in the Chester Upland School District. James was a hard worker and provided for his family. He worked at various jobs such as Fair Acres, Nabisco, Phoenix Steel, and Congoleum in which he retired after 25 years of service in 1998. His hobbies included Bowling, watching Jeopardy, National Geographic’s, Political Commentary, news and let’s not forget dancing. He was also an avid Miami Dolphin Fan. James met and married the late Ida Mae Williams; out of that union was 6 children and he also raised two nieces and a nephew. Later on, he met Loretta Freeman and out of that union came 3 children. James was predeceased by his parents James Williams Sr and Maggie Williams. Ida Mae Williams and also the love of his life of 32 years Loretta Freeman, brother Donald Williams, sister Hattie Williams, niece Dionne Williams, nephew Allen Dunn and son in law Tyrone Sapp. He leaves to cherish his memory his children Louis Thomas (Debbie), Arnita Barbour (Michael), Margie Williams, Janice Sapp “Jannie Boom”, Michelle Williams, James Williams 3rd (Renee), Sheena Ferrell “Stink” (Freddy), Tameka Freeman Anderson, Richard Freeman Jr., Donna Williams and Rickey Saunders, 48 Grandchildren and Great-Grandchildren. His brother Leon Williams “Leebee” (Carol) and a host of other nieces, nephews, cousins and friends.

James Williams Jr. was born on June 18, 1936 to the late Maggie and James Williams Sr. in Daytona Beach, Florida. He was born in the &#8220;Negro Wing&#8221; of Halifax Hospital. His introduction into the world was not without trials and tribulations.... View Obituary & Service Information

The family of James Wiliams Jr. created this Life Tributes page to make it easy to share your memories.

Send flowers to the Wiliams family.