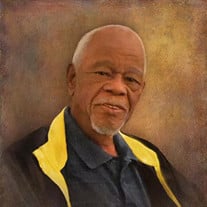 James White, Sr., resident of Philadelphia departed this life on Sunday, November 3, 2019 at the Caring Heart Rehabilitation and Nursing Center at the age of 88. James was born on September 29, 1931 in Chattanooga, Tennessee to the late Teller and Beatrice White. James was educated in the public schools of Chattanooga, TN. After his schooling, James joined the United States Army where he served as a Paratrooper in the 82nd Airborne Division. James was also a member of the Mt. Olive Lodge # 27. He worked various jobs before beginning his employment with the City of Philadelphia for 31 years before retiring. During a brief visit to Philadelphia, he met the love of his life, Alice. On December 29, 1950, James and Alice married, sharing 69 years of marriage. From this union, they were blessed to have four children. James enjoyed spending quality time with his family. Some of his favorite hobbies included bowling, boxing, swimming, and dancing. He would love to play jokes on his family. One thing he loved to do is swim under the water and tickle his kid’s feet with seaweed. His age never stopped him from dancing, from weddings to family gatherings you would see him on the floor and in his later years grooving in a chair. James leaves to cherish in his memory his wife Alice, three children; Bernadine, Patricia (Terry) and Anthony (Shelly). Ten grandchildren; Takia (Edward), Lola, Adrian, Trina (Ken), Dionne, Latifah, Latasha, Sharron, James and Taja. Twenty-two great-grandchildren; Sharelle, Aignyea, Tymier, Sierra, Briel, Nia, Z’Nyviah, Deja, Journey, Sean, Image, Jaiden, Semaj, Kierrah, J’hair, JaBraun, Kahviere, Adrianna, Ashton, Kennedy, Kaiden and David. One great-great grandchild, Kyle. He leaves to cherish extended family Tilda, Linda, Serena, Damon and Zayim. He was preceded in death by his son James White, Jr., two sisters Vivian and Ann. He also leaves behind a host of nieces, nephews and friends.

James White, Sr., resident of Philadelphia departed this life on Sunday, November 3, 2019 at the Caring Heart Rehabilitation and Nursing Center at the age of 88. James was born on September 29, 1931 in Chattanooga, Tennessee to the late Teller... View Obituary & Service Information

The family of James White Sr. created this Life Tributes page to make it easy to share your memories.

Send flowers to the White family.