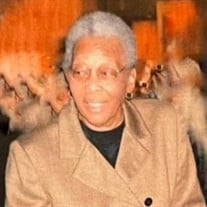 And now these three remain, faith, hope and love. But the greatest of these is Love. 1 Corinthians 13:13 A time to say goodbye… Surrounded by loved ones Hilda Canada, age 93 of Sharon Hill, PA transitioned to eternal peace on April 4th, 2021. A time to be born… Hilda Clara Canada was born on November 25th, 1927 in Pittsylvania County, Virginia. She was the second child of the late Harry E. Coleman and Flossie Fitzgerald Coleman. Hilda was educated in the public school system of Pittsylvania County, VA. At an early age Hilda was a member and baptized at Shockoe Baptist Church, Chatham, VA. A time to embrace… Hilda was married to the late Johnnie Canada. She was the proud mother of six children: Dorothy Francis “Cookie” Pettway, William Romel “Red” Canada, Lloyd David Canada, Carlos Canada, Emage Jacqueline Canada-Reaves and Evelyn Darryl Canada. In 1952 Hilda migrated to Chester, Pennsylvania. While raising small children, she persevered and continued her education through the Licensed Practical Nurse Program at Chester Hospital. Hilda continued to work for the hospital for several years. Hilda was a hard worker and learned many nursing skills that allowed her to transition to Haverford State Hospital in 1966. Her dedication, steadfast patient care, unwavering work ethics, inquisitiveness and knowledge in the field, Hilda was granted a LPN and received her LPN Certificate, Nurse’s Cap and Pin through a special grandfathering program. This afforded her many opportunities to work as a private duty nurse, as well as care for sick family members and friends. Hilda retired from Haverford State Hospital in 1988 after 22 years of service. Hilda was a former member of the Shiloh Baptist Church. While at Shiloh she served on the Nurses Guild and the Missionary Board. Hilda also enjoyed attending the National Baptist Convention along with her friend, Mrs. Earnestine Divine. She was pleased to represent the church and report back the Convention activities. Hilda enjoyed making a home for her children. She taught them the importance of hard work, cleanliness, and to respect their elders. While living in the Fairground Project, Chester Township, she always welcomed the neighborhood children to her house. She understood it took a village to raise a child whereas neighbors could discipline her children and she could discipline theirs. It was a proud day for Hilda and her children when she purchased her home in Sharon Hill, PA. It took hard work and a lot of praying. She opened her heart and home to the neighbors and many children in the area. Hilda enjoyed entertaining family and friends at her home. Always plenty of good food served using fine china, silverware and glasses. No paper products allowed! She enjoyed playing Pinochle with close friends to the wee hours of the morning. Her favorite pastime was going to the Casinos. As the matriarch of her family, she was a devoted member of the Fitzgerald, Glass, Henry, Terry (F.G.H.T) Family Reunion Committee and supported the family reunions until 2019. A time to mourn… Hilda was preceded in death by her husband, Johnnie Canada; son, Carlos Canada; daughter, Emage Jacqueline Canada-Reaves; brothers, Charles and Harry Edward; dear sister, Hazel; grandchildren, Ikee, Raquel “Kelly”, and Monique. Hilda Clara Canada’s life and memories will live on and be cherished by so many. She leaves two sons, William Romel and Lloyd David; two daughters, Dorothy Francis Pettway and Evelyn Darryl, and a granddaughter she raised Monica “Peebles” Carew; 16 grandchildren, 25 great grandchildren, 12 great great grandchildren; a host of special nieces, nephews, cousins, friends and colleagues; her special lifelong friends, Mrs. Theresa Rucker, Mrs. Cecelia Rosenberger, Rev. Claudia DeJarnette Williams (who was like a daughter, a friend and a confidant). Join Zoom Meeting https://us02web.zoom.us/j/86516885942?pwd=dkFwYngwU3RkOTFTUWVwWXVnWVlodz09

And now these three remain, faith, hope and love. But the greatest of these is Love. 1 Corinthians 13:13 A time to say goodbye&#8230; Surrounded by loved ones Hilda Canada, age 93 of Sharon Hill, PA transitioned to eternal peace on April... View Obituary & Service Information

The family of Hilda C. Canada created this Life Tributes page to make it easy to share your memories.

And now these three remain, faith, hope and love. But the
greatest...

Send flowers to the Canada family.