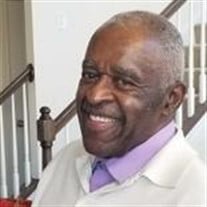 Herbert Ronald Arrington Sr., was born on November 27th, 1938 in Chester, PA to Elbert Eugene and Rachel Arrington. He was educated in the Chester school systems. Herbert was introduced to Christ at an early age and was a long time member of... View Obituary & Service Information

The family of Herbert Ronald Arrington Sr. created this Life Tributes page to make it easy to share your memories.

Send flowers to the Arrington family.