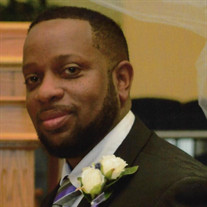 Gordon Anthony Brown (52) of Chester, PA departed this life on November 12, 2020 surrounded by his family. He was predeceased by his father Ronald Brown and his sister Shareen Brown. Gordon was born on August 16, 1968 to Ronald A. and Annette Marie Brown. He was educated in the Chester-Upland School District. After graduating he enlisted in the United States Air Force where he served during Operation Desert Storm, first as an air traffic controller and then as a logistics specialist. Upon leaving the military he trained at CITE for processing which prepared him for his employment with Citibank and Chase Bank in Wilmington, DE as a check processor. Gordon then changed careers and went to Smith Solomon Truck Driver Training School which afforded him employment with Clemmer Moving, J.B. Hunt and several other tractor trailer driving jobs. The job he clearly loved was crew leader for the Highway Department of the City of Chester. He would serve the city residents with pride. He would often say “I run these streets in my city”. Gordon could be found at local establishments playing pool or hanging out with friends. He loved his family and would visit them often and keep in touch with them. He loved to talk, give advice or help anyone in need. Gordon was an avid Eagles fan and would watch them every time they played. He especially enjoyed going to tailgates and going to the Championship parade in Philadelphia with friends. Those remaining to cherish his memory are his loving wife De’Von Sudler-Brown, two sons Eric A. Brown and Quentin Sudler of Chester, PA. Two daughters Ariel Bailey (Michael) of Baltimore, MD and Kamille-Simone Kea of Chester, PA, his mother, Annette Brown of Charlotte, NC, two sisters, Bernadette Hayes and Monica Beauford (Breon) of Charlotte, NC, four granddaughters Jayden Brown of Chester, PA, Khalelah, Khalessi and Kaydence Bailey-Smith of Baltimore, MD and a host of aunts, uncles, nieces, nephews, cousins, extended family members and friends.

Gordon Anthony Brown (52) of Chester, PA departed this life on November 12, 2020 surrounded by his family. He was predeceased by his father Ronald Brown and his sister Shareen Brown. Gordon was born on August 16, 1968 to Ronald A. and Annette... View Obituary & Service Information

The family of Gordon A. Brown created this Life Tributes page to make it easy to share your memories.

Gordon Anthony Brown (52) of Chester, PA departed this life on...

Send flowers to the Brown family.