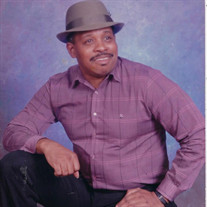 George Alvin Majors, Jr., 74, was born on May 31, 1944 in Chester, Pennsylvania, unto the late, George Alvin Majors, Sr., and Elizabeth Peterson Majors, and departed this life on April 16, 2019, at Lankenau Hospital in Philadelphia, Pennsylvania. He was the second eldest of six children: Charles Peterson, Edward (Chickie) Majors, Nancy Majors Young, Johnny Harris, and Elisa Spivey. He was educated through the Chester School System, where he was a member of the track and field team, and graduated in 1963. George met and later married, the late Judith Shubrick, on November 9, 1964; and through their union, were blessed with four (4) children: Angela Jefferson, Selina Thompkins, the late George Majors, III, and Kevin Majors. He would later wed Roberta Johnson on August 16, 2016. George was a dedicated, and hard worker, who held a position with Allied Chemical Corporation in Marcus Hook, Pennsylvania, for 36 years, until his retirement in 2002. George continued to enjoy running, and joined the Philadelphia Masters Track Club as a sprinter, while in his 30’s, where he’d won numerous awards. One of the highlights of his track career was being named, “Regional Champion” in the 100 meters during a track meet competition in Raleigh, North Carolina. He also enjoyed assisting with the Chester Blazers Track Club, under the direction of Bennie Wright. George loved to sing, he also taught himself to play the guitar. He was a sports fanatic, who loved golf, tennis and most of all, track and field. He was an avid fan of the The Philadelphia Eagles, Sixers, and Phillies.He loved playing mind-challenging games and activities, such as Sudoku, cryptograms, cross word puzzles, chess, dominoes, and was exceptional at answering trivia, and jeopardy questions. George was a big man, but his demeanor was that of a gentle giant. He truly enjoyed life, and loved his family unconditionally. George leaves to mourn his passing, but to rejoice in his life, a wife of 3 years, Roberta Majors of Lima, PA; Two daughters, Angela Jefferson (Rodney) of Folcroft, PA; Selina Thompkins (Alfred) of Chester, PA; One son, Kevin Majors of Pittsfield, MA; Three brothers, Charles Peterson (Sadie) of St. Croix, Virgin Islands; Edward (Chickie) Majors (Cassandra) of Chester, PA; Johnny Harris of Texas; Two sisters, Nancy Young of Chester, PA; and Elisa Spivey of Chester, PA; One brother in-law, William Johnson of Lima, Pa; One sister in-law, Shirley Johnson of Wilmington, Delaware; Seven grandchildren, Jalen Thompkins, Jeron Thompkins, Vaughn Jennings, Tyrone King, Marcus Majors, Marcus Scott, Essence Majors, Elijah Majors, Mariah Goode, and Jazmyn Majors. One aunt, Mary Rice of Chester, PA., and a host of nieces, nephews, cousins, and great grandchildren. George was predeceased by his parents, George Alvin Majors, Sr., and Elizabeth Peterson Majors; and son, George Alvin Majors III.

The family of George A. Majors Jr. created this Life Tributes page to make it easy to share your memories.

Send flowers to the Majors family.