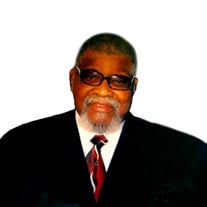 George Winston Brown, Jr. was born on July 7, 1941 to George W. Brown, Sr. and Laura Blakey Brown. He was the middle child of three children and the only boy. He departed this life on Thursday, March 25, 2021. He was affectionately called “Brother George” and “Georgie” by his family and friends. He joined God’s House of Prayer and Repair Full Gospel Church on New Year’s Eve, December 31, 2002. He was an Elder, Deacon, served on the Finance Ministry and was a strong supporter of the Mighty Arrows Youth and Young Adult Ministry. On April 28, 1991 George married Beulah Clements. They would have celebrated their 30th wedding anniversary this year. George attended Fisk University in Nashville, Tennessee and Temple University in Philadelphia. George enjoyed sports and was a big fan of the Philadelphia Eagles and the Philadelphia 76’ers. He was a true foodie and you’d know when the food was good by him bellowing out “fantastic and outstanding!!” He also enjoyed woodworking (making picnic tables and benches for the backyard). He was a versatile and highly motivated creative executive and had many years of experience in worldwide marketing of precious metal which allowed him to develop a long list of reliable and respected buyers, shippers and refineries of those metals. George received an honorable discharge from the United States Army in 1964 after 2 years of service. He retired on August 31st, 2006 from the United States Mint, Treasury Department located in Philadelphia after many years of service. George also had an early retirement from the Philadelphia Board of Education where he was an Electrical Mechanic. He was also President of both the Winston Development Corporation and Brown & Harris General Contractors. He also spent some time working at the Philadelphia Navy Shipyard. George was a member of the former Chester Co-Op. George had a gift for solving complex problems and had strong computer and internet skills. George was preceded in death by his parents and sister, Carmenta E. Brown Heathers, who passed one week prior to him. George leaves to cherish his loving wife, Beulah Clements Brown; sister, Theresa Brown-Kronholm; sisters-in-law, Lou Macklin, Gladys Clements, Bernice Riley, Janet Graham, Julia Henderson, Betty Clements and Ester Clements; brothers-in-law, Elder Darrell Clements, John Macklin, Jr., Edward Riley, Eddie Graham, Jr. and Clarence D. Henderson; he was also a loving uncle, to many nieces and nephews, cousin and friend. Join Zoom Meeting https://us02web.zoom.us/j/81953917254?pwd=LzZoUUVpaTllSHpBRjluMi9jR2k3UT09

George Winston Brown, Jr. was born on July 7, 1941 to George W. Brown, Sr. and Laura Blakey Brown. He was the middle child of three children and the only boy. He departed this life on Thursday, March 25, 2021. He was affectionately called... View Obituary & Service Information

The family of George Winston Brown Jr. created this Life Tributes page to make it easy to share your memories.

Send flowers to the Brown family.