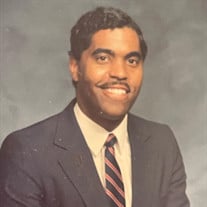 Gary Holt Thomas was born April 30, 1954, to the late John Wallace Thomas Jr. and Jeanne M. Warrick Thomas in Morton, Pennsylvania. He was a devoted servant of the Lord Jesus Christ. Gary began his education at the school district of Philadelphia and spent three years of high school in Luray, Virginia attending Luray High School. He made his appearance in the talent show as an acting member of the Temptations with his brother Bubby, and two of their best friends, Kenny, and Michael. Gary graduated from Darby Township High School in Glenolden, PA. Gary, and his cousin Ricky along with Bubby also acted as the Jackson Five in their later teenage years. In his later years, he attended Lynchburg Bible College, now known as Liberty University in Lynchburg, Virginia and he graduated with a bachelor’s in ministry from Northeastern Bible College in Essex Fells, New Jersey. He worked as a medication transporter for Eckerd Drug Store. Then he worked at Glassrock as a medical supply transporter and later retired from Standard Medical Supply, Inc. At an early age Gary dedicated his life to God and soon after The Lord called him to ministry, and he answered the calling. He was a member of Media Presbyterian Church, but he worked for the Lord daily. He was Non-Denomination Evangelist-Minister who preached the Christian faith from the Bible in the relation to Jesus Christ’s teachings, daily life experiences and end times prophecy to the people. He also spoke at Churches across the country. Gary’s faithfulness to teaching others the word of God gave him the fulfillment to pray for any and everyone wherever the word of God led him. While enjoying life to the fullest Gary was passionate and devoted to teaching others about the Bible. Gary will be remembered by his gracious smile, humbleness, and loving spirit. He loved celebrating life and spending time with his family. Watching all sports was a huge part of his life and he was a true fan of his home teams, the Eagles, Sixers, and Phillies. He enjoyed listening to gospel music and oldies on his walkman and stereo. In his younger years he loved playing basketball, playing the drums and was very artistic. Gary departed this life on December 8th, 2021, to be with the Lord. He leaves to cherish his memories with his seven sisters Carletta (Let), Marretta (Joy), Amelia (Bumper), Nicole (Nikki), Tara, Tamara (husband, Mike) and Erica (Tan). His four brothers John (Bubby), John (Bobby), James (wife, Tamecca), and Mike (wife, Michele); one Aunt, Marretta Dillard, 27 nieces and nephews, 19 great nieces and nephews and a host of cousins and other relatives. Click here for the link for the services for Gary Thomas https://youtube.com/c/MediaPresbyterianChurch

Gary Holt Thomas was born April 30, 1954, to the late John Wallace Thomas Jr. and Jeanne M. Warrick Thomas in Morton, Pennsylvania. He was a devoted servant of the Lord Jesus Christ. Gary began his education at the school district of Philadelphia... View Obituary & Service Information

The family of Gary Holt Thomas created this Life Tributes page to make it easy to share your memories.

Send flowers to the Thomas family.