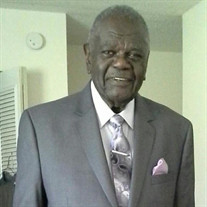 Garfield Herbert Warner was born William Garfield Brown in Greensboro,MD to the late Augustine Brown and Mary Matthews, who died at childbirth, on November 18, 1923. Two years later William Garfield Brown was adopted by Herbert Noble and Esther Elzey Warner, his Maternal Uncle and Aunt. At the ripe age of five and just before his entry into the Chester public school system; William Garfield Brown's name was legally changed to Garfield Herbert Warner ( a combination of his birth middle name and his then adopted Father’s first and last names). His nickname was “Gump”, after the classic cartoon character, “Andy Gump”. His Junior High School vice principal and neighbor, Mr. Beverly Y. Blow, gave Garfield that nickname after catching him clowning around often in school. Garfield attended Booker T Washington, Frederick Douglass and Chester High Schools up until close of his eleventh grade year. Although he had successfully completed the year and was set to enter twelfth grade; times were financially hard in the Warner household so, Garfield left school and found a job at Congoleum Aluminum , in Trainer, PA and he worked there for 2 years. “When the man asked me how old I was I said 18, but I was only 17 at the time. You had to be 18 to work there. You didn’t need proof and there were no applications to fill out back then.“ Garfield, would share this story to show just how bad he wanted to work. In 1943 Garfield enlisted in the Army-Airforce branch of the military, where he served as a Sergeant in the 462nd Aviation squad during World War II and obtained 4 Decoration medals and citations; before gaining his honorable discharge in April 1946. Upon his return to the States, civilian employment remained hard to find; especially for men of color. Garfield eventually found work at Sun Shipbuilding & Drydock Company where he learned a few wielding skills. He also became a bartender and met jazz greats like: the late Dizzy Gillespie, Dinah Washington and many more. On April 30th, 1950 Garfield married Jeanette “Janet” Rochester and from their union came 5 children: Garry Ethan, Marcia (Mar-see-ah ) Anne, Gregg Elliott, Garth Eric and Anita Marie. In May 1950, Garfield was hired as a General labor at General Chemical plant in Claymont, DE. During his employment there; he excelled holding such titles as: Chief Operator and Production supervisor of the Hypo plant. He supervised a large crew of employees and managed various production portfolios including one of the companies top contracts Eastman Kodak, the well known camera and film company. After 37 years and 10 months of employment Garfield Warner retired his hard hat, for home. “I don’t have a high school diploma and now they have a guy coming in to take my place and he has a masters degree, what do you think of that?” He’d say, with a chuckle or two. A year into Garfield's retirement General Chemical’s management team called him to help them out. Their employees had walked out on strike and the company had orders to fulfill. Garfield answered the call, broke through the picket lines and operated the Hypo plant solo twenty four hours for seven days and met all of the supply demands and on time. “ I knew my son, Gregg, was there, and one of the best workers they had, he’d boast with a smile, before continuing, “And I didn’t want them to take it out on him- if I refused to help them out.” But more than work, family and friends Garfield had a love for Jehovah, the only true God for whom he served faithfully since April 19, 1958; when he was baptized a member of the Jehovah’s Witnesses society. A spiritual commitment that lasted until he took his last earthly breath. Garfield was preceded in death by his brother: Foster Brown and sister Lilly Mae Brown-Johnson, and dear cousin Wilmina Groce. He leaves to cherish his memory an ex-wife: Janet Warner, 2 daughters: Marcia Anne and Anita Marie 3 sons: Garry Ethan, Sr (Arlene) Gregg Eliott, Garth Eric, Sr ( Daphne) 4 Grandchildren: Kareem Aki, Sr.(Donna) Garry Ethan, jr. Garth Eric, II and Courtney Lynn 2 Great grandchildren : Aubry and Kareem, jr. 1 Sister-in-law Dorothy Young and a host of nieces, nephews, cousins and friends Garfield’s parting words to all can be found in John 17:3 This means everlasting life the taking in of knowledge of the only true God Jehovah and of the one he sent forth Jesus Christ. Also Proverbs 3: 5,6 to trust in Jehovah with all your heart, and do not lean on your own understanding , in all your ways take notice of him and he Jehovah himself will make your path Straight.

The family of Garfield H. Warner created this Life Tributes page to make it easy to share your memories.

Send flowers to the Warner family.