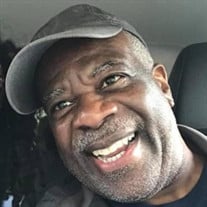 Fredrick Shepeard Sr. was born on August 25, 1953 in Wilmington, Delaware to the late Jesse and Gladys Shepeard. Being the proud fighter he was, when he was diagnosed with one of the rarest forms of cancer, Fred fought through rounds of treatment along with surgery, giving him one full year to be surrounded by his five children and grandchildren, making memories. Though the fight was hard, Dad handled it like the true champ he was. “I fought hard for you,” as he was surrounded by his children. On March 12, 2021 he won his battle, entering into the presence of the Father, leaving loved ones behind. Fred Shepeard Sr. grew up in New Castle, Delaware with eight brothers and sisters. He enjoyed telling stories about his siblings and how he grew up. Fred graduated from DE LA WARR High School in 1972. He participated on several sport teams while attending DE LA WARR. Fred played basketball and ran track. Shortly after High School he enlisted into the Army where he did his basic training at Fort Dix New Jersey. He then did his A.I.T. training in South Carolina at Fort Jackson. Fred married his first wife Barbara Shepeard of 20 years. He then served as an infantry foot soldier in Ansbach, Germany from 1972 to 1974. During his time in the army Fred won several awards such as marksman (M16), a national defense service medal, and sharpshooter grenades. Once Fred returned from Germany, he accepted a job at Chrysler motors as a spot welder, where he worked for 25 years. After retirement Fred dedicated his life to Christ and became an active member at Peoples Baptist Church Full Gospel Ministry. It was during this time he remarried his late wife Evelyn Shepeard of 16 years. He served as an usher and head cook. He looked forward to attending church every Sunday. He took pride in cooking for Shepeard’s Day and other Church functions. Dad, as his kids would affectionally call him, in his spare time loved watching movies, cooking, grocery shopping and spending time with his children and grandchildren. Fred was also a die-hard Dallas Cowboy, Boston Celtics and boxing fan. He always shared fight stories and how he learned from the masters (Muhammad Ali and Bruce Lee). Fred Shepeard was what you call a true Man’s Man. Fred was preceded in death by his parents Jesse Sr. and Gladys Shepeard, his brothers Timothy Shepeard and Lennell Shepherd, granddaughter Julia Bradley and his second wife Evelyn Shepeard Fred leaves to cherish his memories his siblings: Roger and Donna Woodard, Pat and Johnny Sutherland, Jesse Jr and Geraldine Shepeard, Tyrone and Kathleen Shepeard, Joy Shepeard, Brian and Charlotte Shepeard; 5 children: Taquina Bullock-Hudson and son-in-law Tyrone Hudson, Devin Shepeard, Myra Shepeard, Lavel “Ali” Walker and daughter-in-law Javetta Walker, Fred Shepeard Jr. and daughter-in-law Shyree Shepeard; 2 step children Jermane Walker and Tanya Walker. 15 grandchildren: Tykessa, Tyaire, Tyquan, TyDonte, Alecia, Quiyamah, Victoria, Elizabeth, Joelle, Anthony Jr., Laila, Lyric, Liana, Jeremiyah and Rachel and 8 great- grandchildren. A host of cousins, nieces, nephews and lifelong friends. Join Zoom Meeting https://us02web.zoom.us/j/87846653840?pwd=UTVVeGFVa1ZNTElMWHlyV28xckUzQT09

Fredrick Shepeard Sr. was born on August 25, 1953 in Wilmington, Delaware to the late Jesse and Gladys Shepeard. Being the proud fighter he was, when he was diagnosed with one of the rarest forms of cancer, Fred fought through rounds of treatment... View Obituary & Service Information

The family of Fredrick Shepeard Sr. created this Life Tributes page to make it easy to share your memories.

Send flowers to the Shepeard family.