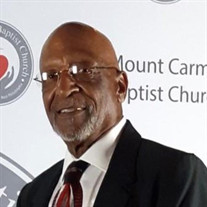 Notice Change of Address: As you know, I’ve moved. I received a call from God, The chief architect the other day and he informed me that my new home was complete. Sorry I couldn’t say goodbye, but He needed me to move in right away. Franklin Holloway affectionately known as “Pop” was born to the late Hurley and Mabel Holloway on August 12, 1948 in Chester Pennsylvania He was educated in the Chester School District Graduating from Chester High School in 1967 Throughout his lifetime Frank proved to be a hard worker. He was employed with the Philadelphia Shipyard, Boeing Company and Gessler Construction Company. He retired in 2013 to begin phase II of his life. On July 18, 1992, Frank married the love of his life Annette Bradley. They enjoyed twenty-eight years of marriage and thirty-three years of friendship. He joined Mount Carmel Baptist Church in Philadelphia on March 15, 1998 under the Pastorate of Reverend Dr. Albert F. Campbell, Pastor Emeritus. Frank had a dynamic bass voice which led him to sing with the special choir assembled for mens day. We could always depend on him to set-up for special church events such as: The Church Picnic and Spiritual blitz. One of his favorite things, in which he took great pride in, was to polish the brass in the pulpit area. Frank was a wonderful and loving husband (her best friend) a good dad, a terrific grandfather, great grandfather, special son-in-law and a very good friend to all who knew him and crossed his path. His favorite thing to do was ride motorcycles and to restore old cars and tailgating with the fans of the Philadelphia Eagles, and hanging with his car club. The Felton Street Cruisers. Frank leaves precious memories in the hearts of: his loving devoted wife Annette; three Daughters Misty (who preceded him in death) Temple and Tamira (Tristan), two sons; Frank Jr. and Troy; Two stepchildren, Andre and Stephanie; five Grandchildren , Troy Jr. (Caterine), Leander, Tristan Jr. Tarif and Ta’Niyah, and great grandchildren, Troy III and Laila Seleae Benson (who preceded him in death) And Pop Pop to many; mother-in-law and father-in-law Doris and Bill Sims; two special cousins Carol Cooper and James Floyd. As well as a special God daughter Tamira Sherrod. Special family and friends: Patricia Woods, Marie Gee, Arlene Wright, Rod Harris, The Cardens, The Doyles, The Johnsons, The Sherrods and the Tuckers (Special friends: Donald Dixon, Valaida Henry, Carl and Marge, John Doyle, Walter Parks Lovingly Remembered ~ The Family ~

Notice Change of Address: As you know, I&#8217;ve moved. I received a call from God, The chief architect the other day and he informed me that my new home was complete. Sorry I couldn&#8217;t say goodbye, but He needed me to move in right... View Obituary & Service Information

The family of Franklin Holloway created this Life Tributes page to make it easy to share your memories.

Notice Change of Address:
As you know, I’ve moved. I received...

Send flowers to the Holloway family.