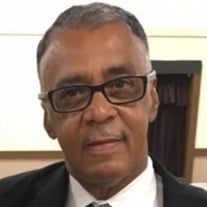 Frank J. Lee was born on July 11, 1956 in Chester, Pennsylvania to the late Lavinia Lee McKinney and Francisco Rosario. Frank was educated in the Chester-Upland School District, and he graduated from Chester High School, class of 1975. Frank... View Obituary & Service Information

The family of Frank J. Lee created this Life Tributes page to make it easy to share your memories.

Send flowers to the Lee family.