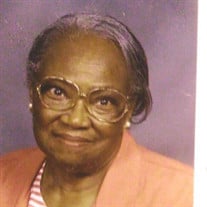 Etta Mae Bacon Scott, “Mae” , was born March 1, 1923 in Liberty County, GA (Fort Stewart Area) to the late Nathan and Katie Johnson Bacon. Mae was the fifth of seven children; five of whom preceded her in death, plus a foster brother. Etta Mae was baptized as a young adult and attended Tremont Temple in Savannah, GA. After moving to Pennsylvania, she joined the St. Daniels, C.M.E. Church serving faithfully as her health permitted. As a dutiful member she was president of the Usher Board and traveled to represent her auxiliary on numerous occasions. Having received numerous awards for faithfulness. Etta Mae was educated in the public schools of Liberty County, GA Schools, attended Dorchester Academy in Midway, GA. She later taught English in the Liberty County school system. She met Willie R. Scott fell in love and they were joined in matrimony. They were blessed with two children Gloria and Nathan. Over the years, she worked several productions and clerk jobs in different capacities. Eventually retiring as a Home Health Aid where she was fondly remembered. She was candid and trustworthy. She was a strong, but a loving person who had a “Big Heart.” She had a natural flair for fashion. She was a critique seamstress and worked at Rob-Ann’s Sportswear as a Supervisor. She taught her daughter how to sew at an early age. Her favorite saying was, “Everything has to look as good on the inside as well as the outside.” Etta Mae was preceded in death by her parents Nathan and Katie Johnson Bacon; her husband, Willie R. Scott; four brothers, RC Bacon, Willis Bacon, Tommie Bacon, Carl Bacon ; a foster brother Will Brown, and a sister Nana Mae Bacon. She leaves to cherish her memories two children, Gloria A. Scott of Savannah, GA, and Nathan W. Scott of Media PA; and a sister Loretta Harris, niece Evone Stephens and nephew Harvey Brown of Savannah, GA.; three grandchildren Jamin Gatewood (Lateaka), Joseph Barbosa (Ashley) and William Scott, three great grands Jamani Taylor, Sophia Barbosa and Jamin Gatewood, Jr., a devoted nephew, Nelson Collins, Jr. and Kevin Collins, and several other nieces and nephews, grand nieces and nephew great-great grand nieces and nephews, a host of cousins, Jonnie Scott and sister Diane (Robert), Francis A. McKellar and family, and one sister-in-law, Eloise Buford.

Etta Mae Bacon Scott, &#8220;Mae&#8221; , was born March 1, 1923 in Liberty County, GA (Fort Stewart Area) to the late Nathan and Katie Johnson Bacon. Mae was the fifth of seven children; five of whom preceded her in death, plus a foster brother.... View Obituary & Service Information

The family of Etta Mae Scott created this Life Tributes page to make it easy to share your memories.

Send flowers to the Scott family.