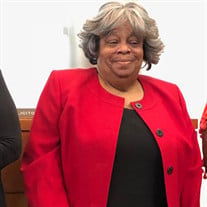 In loving memory, Elder Ethel Johnson, 77, was born January 31, 1943 to the late Mary Manigo and Perium Magee. She was the eldest of four children. She transitioned from this life, but not from God’s care, Tuesday, April 28, 2020, at Crozer Chester Medical Center. Ethel was educated in the Chester Public School System and spent much of her youth with her maternal grandmother, Lena Smith (Nin). She also spent time with her father in both Philadelphia and Federalsburg, Maryland. As a child, Ethel was known for her superior intellect and enduring compassion for others. Given these qualities, she pursued a career in nursing where she applied these attributes in the care of others. She attended Widener University acquiring a Bachelor of Science Degree in 1976. Ethel went on to refine her skills and was elevated to Nursing Supervisor. She worked multiple departments including One Northeast, 2 South, Home Care, and Hospice. Ethel worked the duration of her career at Crozer retiring 2003. Ethel will always be remembered for mentoring and encouraging the youth, especially young mothers and upcoming nurses. She often opened her home to others while they got on the feet. She loved feeding others physically and spiritually. She gave valuable advice such as, “It’s alright to go, when it’s alright to stay.” encouraging others to make things right, forgive, and deal with your baggage before moving on. Ethel was known to be non-judgmental, unconditionally loving, and tireless in her support of others. In her teens, Ethel married the late Robert Oliver McCready. From this union came two sons: Perium Delton and Walter Hamilton. The union did not last. Yet, some years later, God sent her the love of her life, Garland Howard Johnson. They married on December 31, 1975. Their dedication, love, and perseverance was compelling and a role model for commitment. Ethel had a heart open to the bidding of the Lord and served as a member of New Jerusalem Church of God In Christ and Asbury AME. Her dedication and answer to Gods’ calling was formalized upon her ordination as Elder Ethel Johnson March 20, 2014. Before becoming ill, Elder Johnson served faithfully as Sunday School Superintendent, Superintendent of Vacation Bible School, and President of Asbury’s local ministerial staff, under the leadership of Dr. Stanley Gordon Smith. Friends and family recall Ethel’s unconditional love and easy-going spirit. She was always easy to talk to, adventurous, and eager to support others endeavors. She loved serving people, especially young people, as she was young at heart. It was clear, however, that few if anything surpassed her love for her son’s Perium and Walter, and her grandson’s Perium and Jared. She found joy in granting their wishes. Upon gaining a daughter-in-law in Brenda, more than 35 years ago, it was evident that Ethel considered her as her daughter. Ethel was preceded in death by her husband of 35 years, Garland Johnson, as well as siblings Carlton Magee (Yvonne) and Nathaniel Manigo (Jackie), and grandson Tristan Ryan. Ethel leaves to cherish her memory her son’s Perium McCready Sr. (Brenda) of Wallingford, PA and Walter H. McCready of Chester PA.; Grandchildren: Perium D. McCready II (Britney) and Jared McCready; Children by marriage: Richard Johnson, Maxine Johnson, Twyla Simpkins (Reginald), and Theresa Wilmore; Sister-in-Law Jackie Manigo; and a host nieces, nephews, and cousins. She also leaves a special Aunt Barbara Smith and her daughter Lisa Smith-Strothers; Special Friends and chosen family including Secelemon Coleman, Romona Goff, Betty Harris, Evelyn Coxen, and the Asbury family to celebrate a life well lived. Ethel will forever live in our hearts because she loved with her whole heart!!! And though I have the gift of prophecy, and understand all mysteries, and all knowledge; and though I have all faith, so that I could remove mountains, and have not charity, I am nothing...(I Cor. 13:2) Lovingly Submitted, The Family

In loving memory, Elder Ethel Johnson, 77, was born January 31, 1943 to the late Mary Manigo and Perium Magee. She was the eldest of four children. She transitioned from this life, but not from God&#8217;s care, Tuesday, April 28, 2020, at Crozer... View Obituary & Service Information

The family of Ethel E. McCready-Johnson created this Life Tributes page to make it easy to share your memories.

Send flowers to the McCready-Johnson family.