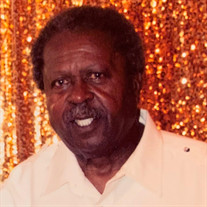 “For I am sure that neither death nor life…nor anything else in creation, will be able to separate us from the love of God in Christ Jesus our Lord.” Romans 8:38-39 Elwood Robinson, affectionately known as Bunky was born on June 17, 1938, in Chester, Pennsylvania to the late Viola Warren and Wilder Thomas and was raised in Linwood, Pennsylvania. He was preceded in death by his son Elwood Barry Robinson and his siblings,Samuel and Roland Robinson and Norice Thomas. Bunky was educated in the Chichester school system and was a graduate of the Class of 1958. While in high school Bunky was a business major. An avid sportsman, who excelled in playing baseball and was a member of the marching band. After high school he later attended beautician school and received a certificate in cosmetology. During his youth, he accepted Jesus Christ as his personal Savior while attending Mt. Hebron A.M.E. Church, Linwood, Pennsylvania. As an adult he joined Mount Pleasant Baptist Church, Twin Oaks, Pennsylvania. He believed in strong family values and provided the best for his family by working multiple jobs. His lifetime of employment began in 1957 with Container Research and The Sun Oil – Marcus Hook Refinery until his retirement. After his retirement he continued to work and helped his son manage both the B & E Tavern and Sharon Bar. Bunky became a member of two vocal singing groups; The Five Lords (circa 1957) and Jimmy J and the J’s (circa 1955). After The Five Lords disassembled, Bunky joined Jimmy J and the J’s in 1960 and they traveled throughout the United States, Canada and Bermuda. The group stayed together 26 years. Jimmy J and the J’s was a mixed race ensemble, who never made race an issue during their tenure, even though race was prevalent throughout the country. When traveling on the road and performing gigs, racial prejudice existed. Bunky and Slip stayed in safe homes with families who welcomed the two band members into their homes since they were not permitted to stay in hotels. While with the R & B singing group, The Five Lords the group recorded two songs, “OO-La-La” and “Falling Tears.” And Jimmy J and the J’s recorded several songs with their hit songs, “You Gave Me Somebody to Love” and “Please Be MyGirlfriend.” In 1963, Bunky married his high school sweetheart, Louise Willis, and to this union, one child, Elwood Barry Robinson was born in 1964. During their union Bunky became a surrogate father, grandfather and mentor to his nieces, nephews and cousins. We were all blessed to have him love us unconditionally. Bunky loved to open his home to his family and friends and on many occasions would have cookouts and plan yearly trips with his friend Jim Colson. He was a gifted musician and would be found playing his trombone. Due to his athletic ability he participated in baseball, karate, golf and bowled for a few local bowling leagues. Bunky was a Philadelphia Eagles fan and became a season ticket holder for many years. Throughout football season, he attended numerous games and Super Bowl games. During his past time he enjoyed listening to music, especially jazz and would watch westerns and sports. Bunky was a member of two fraternal organizations, Prince Hall Masonic Order –Linwood Lodge #87 2nd Masonic District Southeastern Pennsylvania and John A. Watts Lodge No. 224, Chester, Pennsylvania. Elwood leaves to cherish his loving and precious memory, his devoted wife Louise; siblings, Hasan Abdul Azziz, Patricia and Janis Thomas, Judy Dale and Karen Thomas; five grandchildren, Dionne Kenan (Freddrick), Chanel Purnell (Joseph), Adrienne and Barry Cooke and Justin Smoak; four great-grandchildren; one sister-in-law, Joyce Willis and one brother-inlaw, Walter Jones, goddaughter, Brenda Moseley; and a host of nieces, nephews, cousins and friends.

&#8220;For I am sure that neither death nor life&#8230;nor anything else in creation, will be able to separate us from the love of God in Christ Jesus our Lord.&#8221; Romans 8:38-39 Elwood Robinson, affectionately known as Bunky was born on... View Obituary & Service Information

The family of Elwood Robinson created this Life Tributes page to make it easy to share your memories.

“For I am sure that neither death nor life…nor anything else...

Send flowers to the Robinson family.